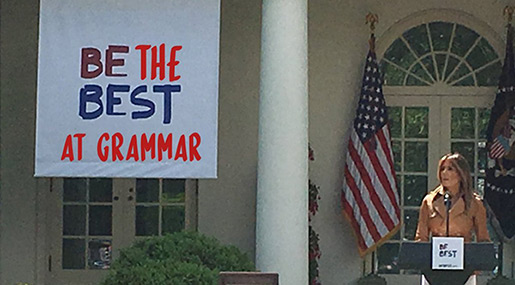 Earlier this week, the US First Lady rolled out her Be Best initiative, aimed at "supporting children and opening dialogue on issues affecting them," and while the project was launched for a good cause, the choice of its name caused much confusion on social media.

Melania Trump's initiative, titled "Be Best" has spurred quite a stir on the World Wide Web, as many netizens pointed out that the phrase was grammatically incorrect, and suggested that it would sound better (and right) if the adjective was preceded by the definite article "the". Some stressed that the First Lady could have opted for "Be the Best," or "Be Your Best," which would have made the slogan "perfect."

The lion's share wondered how the name was conceived in the first place, laying out their theories.

There were those who turned to sarcasm and irony to mock the unfortunate name.

In the meantime, others accused FLOTUS of plagiarism, saying that her Be Best slogan felt awfully familiar, and reminded fellow users of how former first lady Michelle Obama's called on men to "be better."

Many noticed that her booklet on social media guidelines, "Talking With Kids About Being Online," wasn't exactly original, and had been unveiled during the Obama era.

Reacting to the allegations of plagiarism, the White House stressed that the media took "a day meant to promote kindness and positive efforts on behalf of children to instead lob baseless accusations towards the First Lady and her new initiatives."