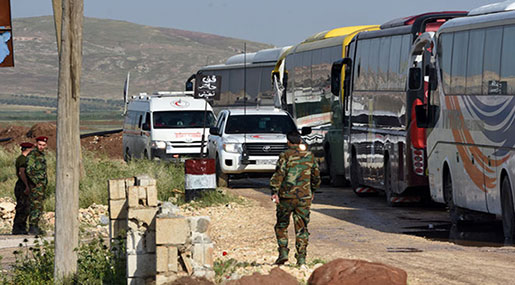 
A number of Syrian Arab Red Crescent [SARC] ambulances transporting people with critical conditions from the terrorist-besieged towns of Kefraya and al-Foua'a in Idlib and a bus carrying 42 abductees from Estabraq arrived at al-Ees corridor south of Aleppo city.


The abductees arrived on board a bus at al-Ees corridor, from where they were transferred to Aleppo hospitals for medical checkups prior to transporting them to their relatives later.

Meanwhile, 5 people in critical conditions and 18 others accompanying them were transported from Kefraya and al-Foua'a by SARC ambulances on Tuesday to al-Ees corridor.

All the humanitarian cases were suffering from serious injuries as a result of the terrorist attacks on the two besieged towns.

Relatively, the arrival of the humanitarian cases and abductees is part of implementing the first stage of the agreement for the exit of terrorists from Yarmouk Camp in Damascus and freeing the people besieged in the two towns, and freeing the abductees from Eshtabraq town.

In parallel, the operation took place while some 5 buses were transporting 200 terrorists out of al-Yarmouk Camp, south of Damascus.


A number of the freed abductees expressed overwhelming happiness for being freed from terrorists' grip and paid tribute to the heroes of the Syrian Arab Army and its allies who contributed to ending their suffering.

Meanwhile, the families inside the towns are wary that the terrorist organizations might target the buses carrying the trapped people during their evacuation, local sources said.

Earlier on Monday, 22 buses left Aleppo city towards Kefraya and al-Foua'a towns to transport the first batch of the besieged people inside the two towns [some 1500 civilians] to al-Ees corridor after which they will be taken to Jabrin makeshift center on the eastern outskirts of Aleppo city.