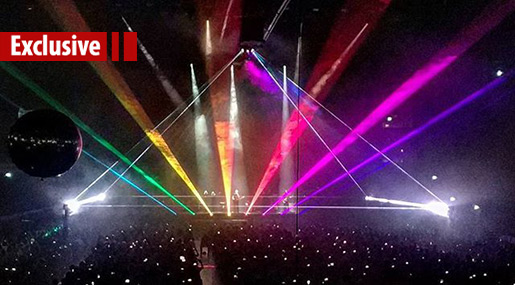 I was once lost, but now I'm found

Was blind, But now I see

Not to speak religion-wise here, these lines from the "Amazing Grace" hymn say a lot about the current political situation in the region and the international arena.

The foreign-backed war on Syria, the Saudi-led aggression on Yemen, the suppression of the Rohingyas, the regime crackdown in both Saudi Arabia and Bahrain... have all had one sole achievement: they unmasked so many people, notably in the entertainment industry, as it turned out - cannot see reality for what it is, or at times, choose to see what suits their interests disregarding the greater good.

News and gossip regrading A-listers' political views on various disputed issues have circulated social media platforms, with fans showing support or opposition regarding what he had to say.

The most recent happenstance is that of British rock band Pink Floyd co-founder and singer Roger Waters during his concert in Barcelona on April 13.

Waters who made use of his fame and status, became a political personality fighting the "Israeli" entity's apartheid policies toward the Palestinians and their Cause.

He had always been an advocate for human rights issues.

Last Friday, Waters denounced the "White Helmets" who he called a "fake organization" fronting for terrorists and providing propaganda for "‘jihadists' and terrorist".

A video posted on YouTube by a group called "Hands Off Syria", the A-lister explained that listening to "propaganda of the ‘White Helmets' and others, we would be encouraged to encourage our governments to go and start dropping bombs on people in Syria," saying to do so would be a "mistake of monumental proportions".

In the video, Waters begins by addressing the audience saying a certain person wanted to come on stage and make a speech about last week's alleged chemical gas attack in Syria's Douma.

"He is one voice, I personally think he is entirely wrong, I believe the organization that he purports to represent and who he supports, the ‘White Helmets', are a fake organization that is creating propaganda for ‘jihadists' and terrorists, that's what I believe," Waters said.

What sympathetic words from someone who has experienced recruiting attempts by the powerful pro-war PR operation behind the "White Helmets", he refused to be drawn in.

According to the Grayzone Project, a public firm representing the "White Helmets" called The Syria Campaign attempted to recruit Waters by inviting him to a lavish dinner organized by a Saudi-British billionaire, Hani Farsi.

The rock legend was lobbied again to support the "White Helmets", but this time by an eccentric French photojournalist affiliated with what he described as a "very powerfull [sic] Syrian network."

Though, Waters did not respond to either request, saying "I was quite suspicious after I was invited to that [‘White Helmets'] dinner," Waters said as quoted by the Grayzone Project. "And now my worst suspicions have been confirmed."

These emailed solicitations from the "White Helmets" representatives were provided by Waters to the Grayzone Project. 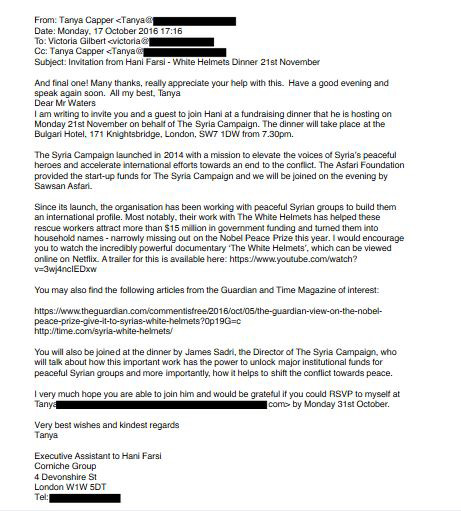 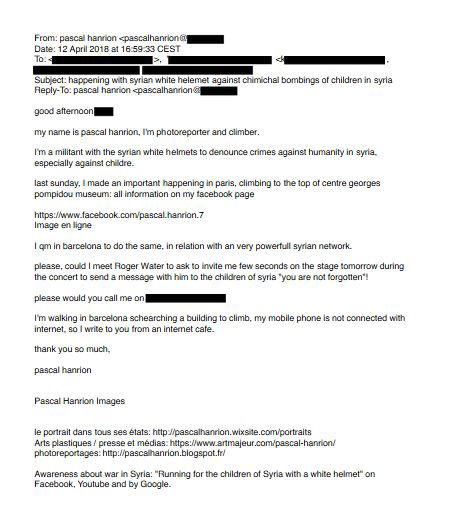 The Grayzone Project mentioned that the documents reveal how the organization's well-funded public relations apparatus has targeted celebrities as the key to the hearts and minds of the broader Western public.

Unlike many other A-listers, however, Waters took time to research the "White Helmets" and investigate its ulterior agenda.

Observers and rights groups indicated Saudi Arabia still has a dire human rights record and is involved in a devastating conflict in Yemen. Not everyone saw Bin Salman's Hollywood tour kindly, as social media users notably blasted The Rock for cozying up to the royal.

And according to Max Blumenthal, founder of the Grayzone Project, in an interview with RT, "the ‘White Helmets' were the only source that these governments were relying on to justify their attacks," adding that the "White Helmets" "are operating on the ground alongside Al-Qaeda and their allies, and these are just documented facts."

The "White Helmets" were the first to report on the alleged chemical attack in Douma. Although it's been widely praised in the West for its staged rescue work, its members have repeatedly been accused of having links to extremist groups.