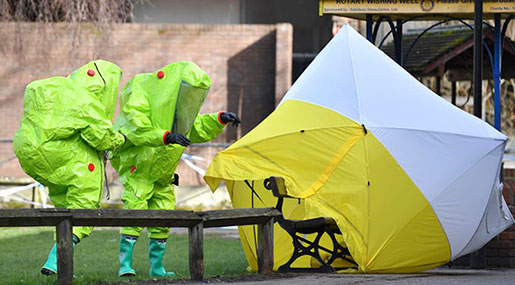 
The UK's narrative in the Skripal case is a "story woven with lies," with London continuously trying to "deceive" the international community, according to Russia's OPCW envoy who highlighted eight examples of such misinformation.


"We've tried to show that everything our British colleagues produce is a story woven with lies," Russia's permanent representative to the Organization for the Prohibition of Chemical Weapons [OPCW] Aleksandr Shulgin told reporters on Wednesday, following the organization's meeting on the Skripal case.

"And, unlike the British, who aren't used to taking responsibility for their words and unfounded accusations, we showed specific facts why we believe our British partners, to put it mildly, are 'deceiving' everyone."

The official provided eight examples of UK-pushed misinformation, surrounding the March 4 events, when the former double agent Sergei Skripal and his daughter Yulia were poisoned in the town of Salisbury:

6. Experts pin the blame on Russia

7. 'Novichok' is a Soviet invention, so it has to be Russia