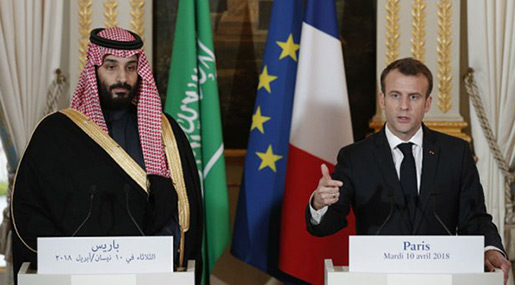 President Emmanuel Macron on Tuesday defended French weapons sales to the Saudi-led coalition fighting in Yemen, but said he was concerned by the humanitarian situation and would host a conference on the issue before the summer.

"Between now and the summer a joint conference will be held on Yemen to clarify what is being done and what needs to be done," Macron said at a news conference alongside visiting Saudi Crown Prince Mohammed bin Salman [MBS].

Pressure has been mounting on Macron to scale back arms support for Saudi Arabia and the United Arab Emirates (UAE), which are leading the coalition fighting in Yemen.

More than 10,000 people had been martyred and over 3 million displaced during the Saudi-led aggression on Yemen, with no sign of a diplomatic breakthrough to ease the crisis.

"Since the start of the conflict in Yemen, France has adopted a very specific process whereby all sales of military equipment are analyzed on a case-by-case basis and on the basis of reinforced criteria that reflect respect for international humanitarian law and the risk of harm to civilian populations," said Macron.

France is the world's third biggest arms exporter and counts the two countries among its biggest purchasers.

The comments came at the end of MBS' three-day official visit to France, which saw French and Saudi companies signing draft agreements worth a total of €14.5 billion ($18 billion), according to a French-Saudi business forum.

The memoranda of understanding cover sectors including petrochemicals, water treatment, tourism, health, agricultural and cultural activities, business leaders and representatives of both governments said in a statement.

Relatedly, a human rights group on Tuesday filed a lawsuit in a Paris court against MBS, accusing him of complicity in torture and inhumane treatment in Yemen.

The complaint on behalf of Taha Hussein Mohamed, director of the Legal Center for Rights and Development (LCRD), said the prince, who is Saudi Arabia's defense minister, was responsible for attacks that hit civilians in Yemen.

The Yemen-based rights group on its website said it monitors and documents rights' violations in Yemen.

"He ordered the first bombings on Yemeni territory on March 25, 2015," the group's lawyers, Joseph Breham and Hakim Chergui, said in the complaint seen by Reuters.

"The existence of indiscriminate shelling by the coalition armed forces affecting civilian populations in Yemen can be qualified as acts of torture," they wrote.

The complaint also accuses the coalition of depriving millions of people of access to basic necessities due to indiscriminate bombings and a naval blockade of Yemeni ports. The war has pushed the country to the brink of famine.

While the war in Yemen drags on, the Saudi crown prince said his kingdom could also take part in military action against Syria after an alleged chemical attack in the town of Douma.

"If our alliance with our partners requires it, we will be present," said MBS.