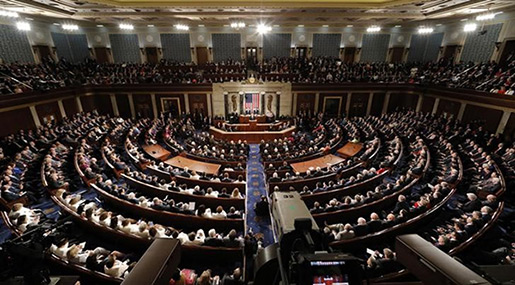 The United States is considering a new batch of sanctions against Russia over Moscow's alleged "malign activity around the globe."

The draft cites Russia's alleged role in the "Skripal case" as the main reason for ramping up economic pressure on Moscow.

The pertinent bill, posted in the Congressional Records, envisages a complete ban on all kinds of financial operations pertaining to Russia's sovereign debt and a potential ban on deals with securities issued by Russia's Central Bank, the National Wealth Fund and the Federal Treasury.

The sanctions are to take effect no later than 90 days after the date of their imposition.

Twelve of the 14 Russian companies, which have been added to the list, are privately owned.

The rest - Rosoboronexport and Russian Financial Corporation - are state-owned.

Washington has said that the Russian businessmen have been sanctioned because of the help they have given to the Russian government.

"They have reaped great benefits under the Putin regime and who play a key role in advancing the Kremlin's malign agenda," a senior Trump Administration official said.

He added that they "will no longer be insulated from the consequences of their government's destabilizing activities."

The official went on to add that the sanctions were not aimed against the Russian people.

"The door of dialogue is open," he noted.

In Moscow, the Foreign Ministry has warned that Russia will not let the new US sanctions go unanswered.

"Of course, we will not leave the current and any future anti-Russian attack without a harsh response," the ministry's press service said in a statement. "However, we would like, first of all, to advise Washington to get rid of the illusions that we can be spoken to in the language of sanctions."

"Having not waited for the desired effect of previous sanctions, Washington politicians have reached such absurdity that they are trying to hit our companies which have long maintained business ties with the United States, on which thousands of jobs depend there," the statement said.

Ministry spokeswoman Maria Zakharova has warned that Russia in turn was working on a list of possible retaliatory measures against the United States.

"There will be a response. We traditionally do respond, we have a list of possible retaliatory measures which are being explored. There are people responsible for that," Zakharova said, without elaborating.