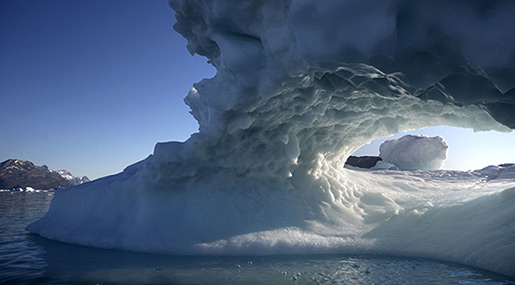 The results of new research detail that the Greenland ice sheet is melting at its fastest rate in 400 years.

A new report released in the peer-reviewed by-weekly scientific journal Geophysical Research Letters details that the rate of ice melt over the expanse of the Greenland ice sheets has been accelerating over the last several decades.

Melting rates, according to the new study, are now almost double that of the end of the 19th century. Climatologists note that much of the reason for the rapid escalation in melting of the Greenland ice sheet is due to a significant increase in summertime temperatures; a 1.2 degrees Celsius average rise since the 1870s, according to Scientific American.

Rapid ice melting in the planet's northern hemisphere - particularly within the enormous Greenland ice sheet - will contribute to a concurrent rise in sea levels, affecting some two billion people (about one-fifth of the population of the Earth) who live near the oceans, according to scientists.

"If we're going to make accurate predictions of sea-level rise, we have got to understand how Greenland responds to warming," said Dartmouth College climate scientist Erich Osterberg, a co-author of the study, cited by Scientific American.

The authors of the study noted that although oceanic and atmospheric conditions were almost the same at the end of 19th century and into the early part of the 20th century, Greenland ice sheet melt rates are now almost double that of a century ago.

Summer air temperatures are seen as being the primary driver of the effect, as those figures have risen on average over the past hundred years more than a degree Celsius, due primarily to ongoing global warming as a result of human-induced climate change.