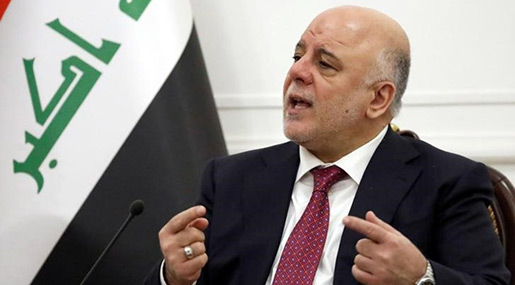 Iraqi military forces have plans to launch a cross-border operation to fight against terrorists on the territory of Syria, Iraqi Prime Minister Haider Abadi said Sunday.

Abadi noted that the plans were discussed on Saturday with Iraqi military commanders, stressing that Iraq did not intend to violate any country's sovereignty.

Abadi admitted that the Wahhabi Daesh [Arabic acronym for "ISIS" / "ISIL"] terrorists were still present in some parts of the country but vowed to eliminate them.

Abadi declared the end of the country's fight against Daesh last December after Iraqi troops had re-established complete control over the country's border with Syria.

Daesh had kept Iraq under its control for several years, beginning in 2014, after seizing Mosul, the country's second-biggest city, and making it the terrorist group's so-called capital in Iraq.

In the summer of 2017, Iraqi forces regained control over the city, while later in November, over the town of Rawa, the last Daesh stronghold in the country.