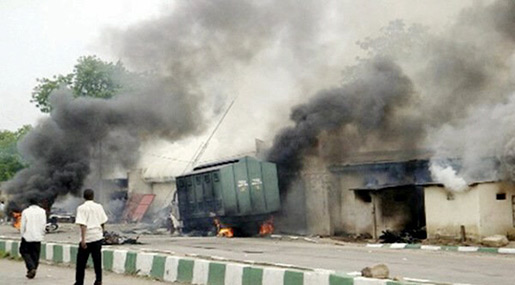 The road was on Saturday reopened by the Nigerian military four years after it was taken by Boko Haram.

The gunmen stormed the village in their dozens at about 10 p.m.

Sources said the gunmen opened fire on the sleeping residents who scrambled out of their houses into the bush.

Some lives were said to have been lost, while some others sustained injuries.

The spokesman of the military in Maiduguri, Onyema Nwachukwu, confirmed the attack, but said it was repelled.

"At about 10.09 pm yesterday , elements of Boko Haram insurgents who had been routed out of the Sambisa forest following troops' offensives and clearance operations attempted to loot Mashumari village, a remote settlement under Konduga Local Government Area for food and other logistics," he said.

"Our troops swiftly moved in and engaged the insurgents killing one insurgent, while others fled in disarray.

"A civilian who was wounded in the encounter is currently receiving medical attention.

He added that the "troops are still trailing the fleeing insurgents".

The theater commander of the military operation in the North-east, Roger Nicholas, had on Saturday during the opening of the Maiduguri-Bama highway said the insurgents had been significantly degraded as such cannot pose any threat to the civilian users of the road. He, however, said military escorts would be provided for each trip through the 75km road.