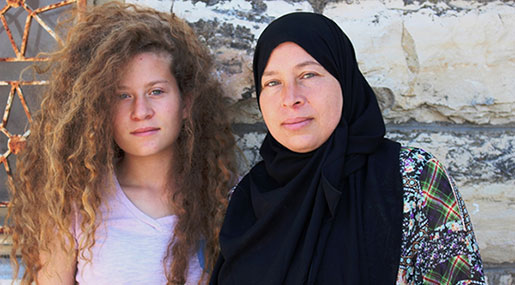 The incarceration of the two most important women in my life, my wife Nariman and daughter Ahed, is not an extraordinary or exceptional case.

On the contrary, Palestinians have continued to endure such atrocious behavior from "Israel" as an occupying power since the Nakba of 1948. Perhaps my family represents a model of Palestinians in general, and women specifically, who suffer from inhumane practices on a daily basis.

While families in the Middle East and elsewhere celebrate Mother's Day, my heart aches for my late mother who passed away about three years ago. She died after suffering from a severe illness, while also still grieving the murder of my sister Bassema. About 25 years ago, my sister was brutally beaten to death by a group of "Israeli" settlers at the entrance of an "Israeli" court while waiting to see her detained son.

During this painful period, I also went through one of the most difficult and life-threatening periods of my life. While incarcerated in an "Israeli" prison, I sustained a brain hemorrhage that led to a coma, which left me incapacitated for a long period. The day I was released from "Israeli" prison, my sister was buried; a devastating time for me and my family. While the Palestinian people continue to suffer from this indefinite occupation, it feels as if these devastating days are a never-ending part of our everyday lives.

Such is the case as my wife and daughter continue to be imprisoned by the "Israelis." In the early morning hours of 19 December, 2017, over 30 "Israeli" soldiers invaded my home and imprisoned my 16-year-old daughter, Ahed. The soldiers declared my village a closed military zone and sealed off all entrances and exits. With more than 12 military jeeps, they fired teargas and detonated sound bombs - they came to terrorize my child and family. Ahed was strong, resilient and calm. While sitting chained in an "Israeli" military jeep, she called, "Don't worry, I am strong". Yes, my child will continue to be strong and resilient and perhaps that is why many people idolize her, while others fear her strength.

Prior to the arrest, some "Israeli" groups launched a vicious campaign against her because she stood tall against "Israeli" intimidation and brutality. When my wife Nariman attempted to visit her at the "Israeli" interrogation center, she was also arrested. Today, these two strong women await justice and freedom.

I should not be surprised by Ahed's perseverance, strength, and rejection of the occupation. When she was a small child she asked me what ‘occupation' means. "Fear," I said. Despite Ahed's gentle and warm personality, she grew up knowing how to face that fear and to be strong in the face of it. She stood strong against an armed solider and all that he represented in this illegal occupation. All she did was to unwaveringly say no, in her words and actions, to the occupation.

Despite Ahed's youth, she stood strong and proud against intimidation and threats during her interrogation by the "Israeli" military. They tried to break her will, but my child won. In a letter sent through her lawyer, Ahed said, "What happened was expected, and when I remember why I am in "Israeli" prison, my will becomes stronger. This cause deserves a great deal. We have endured difficulties and we will overcome, as I was taught by my parents. The encouragement and enthusiasm I have received has made me immensely happy, however, I hope that the rest of the Palestinian prisoners receive the same support as I have."

No doubt, I am a proud father, a father of a girl that has become an icon of popular and peaceful resistance. However, my heart is full of sadness and anger as my child is robbed of her childhood.

Despite my family's long history of peaceful resistance and demonstrations, and both myself and Nariman's numerous arrests by the "Israelis", I cannot hide the fact that I am in distress and fear for Ahed's future-perhaps because this is her first experience in "Israeli" prisons and her first time away from home.

Since 2010, Nariman has participated in hundreds of peaceful demonstration organized in our village against the "Israeli" occupation. Our home was raided hundred times and Nariman was arrested three times-but this did not deter her from continuing her struggle against the occupation. During the course of demonstrations, she rescued countless Palestinian youth who sustained injuries and attacks by the "Israeli" military. Yet, she was not able to rescue her own brother who was brutally killed by the "Israeli" military in 2012. Nariman captured the "Israeli" attacks on video that day, but did not know that she was in fact filming the death of her own brother. Planting the seeds of resilience in Ahed and my children, Nariman continues to be a role model to women everywhere.

The Palestinian people continue to endure hardship and dispossession, from the time of the Nakba in 1948 until today, both at the hands of the "Israeli" occupying authorities, as well as the terror of illegal "Israeli" settlers. Palestinians worldwide, whether living under occupation, in the refugee camps, or elsewhere in exile-continue to live a daily Nakba. We in An Nabi Saleh village represent every Palestinian family who continues to endure "Israeli" policies of disenfranchisement, a policy that deprives Palestinians of the basic human right to live free. Despite these inhuman and illegal policies and practices against our families, and especially against women in particular, Palestinian women have persisted in their fight. In An Nabi Saleh, women and girls are leaders, and their role in peaceful demonstrations is vital, and are considered role models for many women here in Palestine and abroad.

While the "Israelis" chose Mother's Day to prosecute Nariman and Ahed, my family, village, and Palestinians worldwide await the day when they, and all political prisoners, are released from "Israeli" prison. I would like to extend my family's sincere gratitude to all those who have supported my wife and daughter, especially human rights organizations.

I am a proud husband and father. I am proud of all the women and mothers of Palestine who, with their strength and determination, have taught us to be fearless.

I am proud that today, my child's beautiful face has become a universal symbol of steadfastness, resistance and anti-injustice - like the iconic image of Che Guevara.