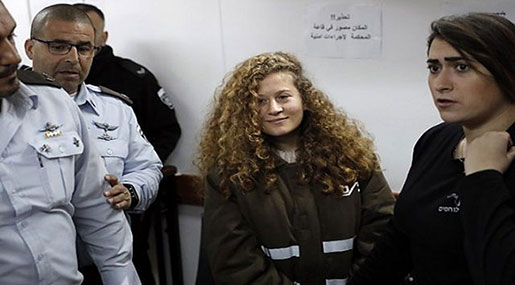 An "Israeli" military court blocked a bid to make the high-profile trial of Palestinian teenager hero Ahed Tamimi public, meaning it will continue behind closed doors, her lawyer said Monday.

"A public trial was the only defense and it's obvious that in its absence, Ahed Tamimi will not be entitled to a fair trial," Lasky added.

Tamimi was arrested four months ago after the 17-year-old appeared in a viral video, along with her mother and cousin, slapping and shoving two "Israeli" soldiers outside their family home in the village of Nabi Saleh in the occupied West Bank.

The occupation soldiers had taken up positions next to the house amid near daily protests in the village against US President Donald Trump's decision to recognize the holy city of al-Quds as the capital of the Zionist entity.

Tamimi has been charged with 12 counts including assault and could face a lengthy jail term if convicted.

Her trial -- which has found wide resonance with Palestinians -- opened on February 13 and is scheduled to continue on March 21 in front of the Zionist Ofer military court near Ramallah in the West Bank.

Mariam Barghouti, a Palestinian activist close to the Tamimi family and Ahed's mother, Nariman, confirmed to AFP that the request for a public trial had been rejected.

The United Nation's human rights body and the EU expressed concern over Ahed's case, and Amnesty International called for her immediate release.

About 350 Palestinian children are being held in detention by the "Israeli" regime, according to Amnesty.