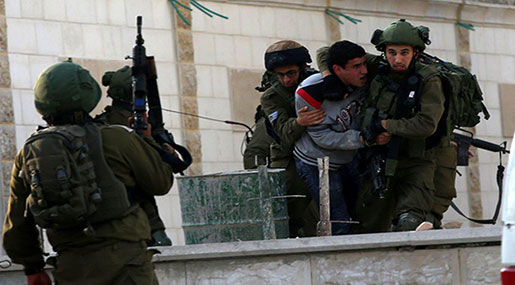 "Israeli" occupation forces detained over 1,000 Palestinians, including 274 children, during the months of January and February, according to Palestinian prisoners rights group Addameer.

Among the detainees were 274 children, 23 women and four journalists.

Those arrested included: 381 individuals from al-Quds; 233 from Ramallah and al-Bireh and 20 from Salfit in the central West Bank; 140 from al-Khalil and 118 from Bethlehem in the southern West Bank; 133 from Jenin, 107 from Nablus, 59 from Tulkarem, and 54 from the Qalqiliya in the northern West Bank; 21 from the Jericho, and 30 from the Gaza Strip.

In all, the number of Palestinian prisoners and detainees in "Israeli" jails, as of February 28, 2018, was 6,500, Addameer reported.

The report went on to detail violations against female prisoners in Zionist occupation prisons, which include: the denial of medical treatment, poor quality food, overcrowding in the places of detention, and physical and psychological abuse.