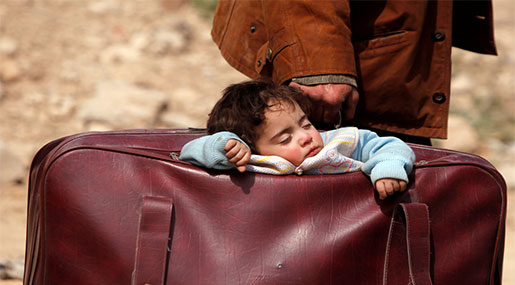 
Thousands of Eastern Ghouta residents - the biggest number leaving the area so far -embarked on a journey to escape the shattered suburb during a humanitarian pause.

Some 800 civilians were leaving the area every hour through a humanitarian corridor established by the Russian Center for Reconciliation in Syria and the governmental forces.

While some of them go by car, most still travel over this long distance on foot. Entire families are seen leaving the area, with the people often carrying their children. Some are also seen carrying stretchers with injured or sick relatives.

The people who managed to flee the areas controlled by the armed groups told RT that militants continue to use civilians as human shields and commit various atrocities against the locals, preventing them from leaving.

The mass exodus has been facilitated by the fact that hostilities in some parts of eastern Ghouta have nearly ceased. Meanwhile, the situation in Douma, the biggest town in the region, which is still held by various armed groups, has "significantly stabilized," the Russian military said.

The humanitarian pause also allowed aid to be provided to civilians, according to an earlier statement from the Russian Reconciliation Center, which added that the ceasefire between the warring parties in the area held for three days in a row.

The militant-held Damascene suburb has been the scene of intense fighting since Syrian government forces launched an offensive in February in a bid to dislodge terrorists from their last bastion outside Damascus.