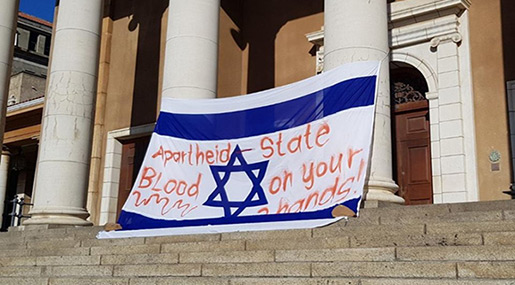 A massive "Israeli" flag covered in red stood on the steps of the main university building with the words "Apartheid State, blood is on your hands" written on it as "Israel" Apartheid Week kicked off across the country on Monday.

Meanwhile, slogans such as "‘Israel' is anti-Black" and "Zionism is Racism" had been spray-painted in several main areas of the Wits University campus in Johannesburg.

BDS supporters and Wits Palestinian Solidarity Committee members also covered their faces with kufiyahs, wore black and held signs written in red - the color of blood - calling on students to come and see the "truth."

The country's ruling party, the African National Congress, threw its support behind the 14th annual "Israel"-Apartheid Week and said it was "actively participating... as part of our ongoing commitment to the heroic people of Palestine."

The ANC said that the continued imprisonment of 17-year-old Ahed Tamimi "is an example of the extreme and unacceptable abuse of child rights, human rights and international law by the ‘Israeli' regime.

"‘Israel'-Apartheid Week is perhaps one of the best examples of South Africa's unity in diversity and the vibrancy of our civil society," it added.

The ANC also referred to the "Israeli" regime's plan to deport thousands of African asylum seekers. The announcement also said that the ANC viewed with "great concern" what it called "the increased ‘Israeli' racism against Africans," adding that such "oppressive tendencies" confirmed the importance of a December 2017 ANC conference resolution for the "immediate and unconditional downgrade of the South African Embassy in ‘Israel' to a liaison office."

The worldwide event, which kicked off on February 19 and ends on April 17, seeks to build support for the Boycott, Divestment and Sanctions (BDS) campaign against "Israel".