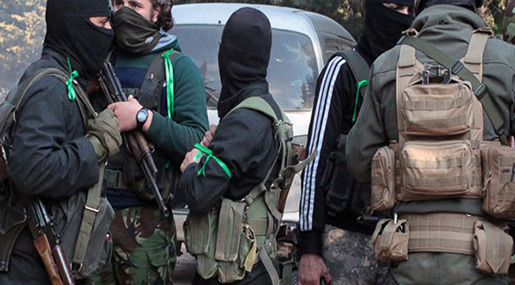 For the first time since its meteoric rise in 2012 amid the chaos of war, al-Qaida's branch in Syria is in retreat, battling rival militant groups in the north and fighting for survival in a key foothold near the capital, Damascus.

Over the past three weeks, the extremist group has been driven from nearly all of the northern province of Aleppo, losing dozens of fighters in battles there and in nearby Idlib province.

The fighting poses a major challenge to the militant group, already beset by infighting and a string of assassinations that have taken out some of its top leaders. Unlike previous battles in which al-Qaeda-linked militants were able to quickly crush their opponents, the fighting has been particularly fierce, with the militants losing dozens of villages.

The al-Qaeda-linked coalition known as the "Levant Liberation Committee" is still one of Syria's most powerful armed groups, with fighters numbering in the thousands.

While the US-led coalition and Russian-backed Syrian troops have focused on driving the Wahhabi Daesh [Arabic acronym for "ISIS" / "ISIL"] group from the country's east, the al-Qaeda-linked group has consolidated its control over Idlib, where it remains the strongest force despite its recent losses there.

The group's presence has also raised concern in nations from Turkey to the United States that fear the global network founded by Osama bin Laden could use its presence in northern Syria to launch terrorist attacks around the world.

The recent fighting appears to have been triggered by last month's assassination of a senior al-Qaeda official, Abu Ayman al-Masri, who was riding in a car with his wife when members of a rival militant group, Nour el-Din el-Zinki, fired on their vehicle, killing al-Masri and wounding his wife.

The killing led to battles in Aleppo and Idlib that have raged for the past three weeks.

The shooting was preceded by the merger of Nour el-Din el-Zinki and the ultraconservative Ahrar al-Sham, both former al-Qaeda allies now turned enemies.

Amid the recent battles, the new coalition, the Syria Liberation Front, has forced the al-Qaeda fighters to retreat west to Idlib.

The insurgents say that the war against al-Qaida will not stop until the extremist group is crushed in Syria - an ambitious goal. It is also a striking statement, considering the rival groups once turned to al-Qaeda's experienced and battle-hardened fighters for support in the battle against the Syrian Army.

Brett McGurk, the top US envoy for the coalition battling Daesh, said last year that Idlib is the largest al-Qaeda haven since bin Laden's days in Afghanistan.

"This war will not stop," said Bassam Haji Mustafa, a senior official with the Nour el-Din el-Zinki group. "This is a real war against al-Qaeda, its extremist ideas and terrorism."