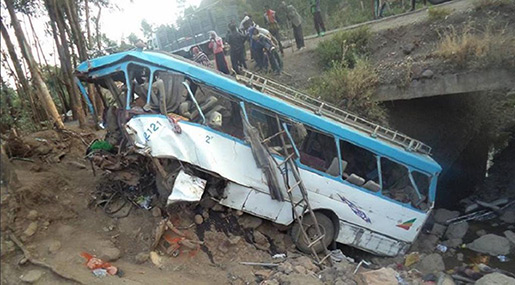 Thirty-eight people were killed in northern Ethiopia on Monday when the bus carrying them veered off the road, state radio Fana reported on Tuesday.

"A total of 38 people (28 men and 10 women) were killed in the accident," Fana said on its website, citing the Legambo district authorities, where the accident took place, and stating that surviving passengers, 10 in number, suffer "serious and light" injuries.

Lagambo, which is part of the Amhara regional state, is located some 482 km north of Addis Ababa.

The bus, carrying a total of 48 passengers, reportedly tumbled off a five meter cliff in the specific area called Genete Selam Ber, Kebele 07, in Legambo.

Most of them were university students, according to Legambo wereda communication bureau. The 10 who were injured are receiving medical treatment at Hidar 11 hospital in the Akesta town.

It is not yet clear what caused the bus to derail off the cliff.