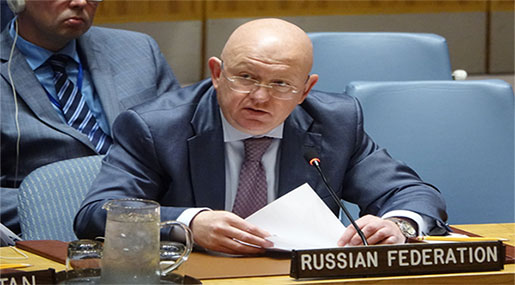 
Russia's envoy to the UN Vassily Nebenzia accused militant groups based in Eastern Ghouta of using chlorine gas, while stressing that the Syrian government has every right to eradicate the "terrorism hotbed" near its capital.


As Nebenzia defended Syria's government and the ongoing anti-terrorism operation in Eastern Ghouta, he asserted that it has "every right to try and remove the threat to the safety of its citizens."

"According to information at our disposal, on March 5, Al-Nusra militants used chlorine substance in Eastern Ghouta, which injured 30 civilians. All this is done to prepare the grounds for unilateral military actions against sovereign Syria," Nebenzia stated.

"The suburbs of Damascus cannot remain a hotbed of terrorism. And it is being used for continued attempts by terrorists to undermine the cessation of hostilities," he added.

The ongoing operation in the Damascus suburbs does not violate resolution 2401, which allows the continuation of the battle against terrorists, he further stressed. The terrorists, do, in fact, frequently attack hospitals and other civilian facilities, and the attacks are well-documented, he added.

"Since the resolution was passed, more than 100 people died from this and a considerably higher number were wounded. More than one hospital...was shelled," Nebenzia said.

"These were true hospitals, genuine hospitals, not headquarters of fighters which they very frequently claim to be hospitals."

The militants also are preventing the civilians from leaving the combat zone, raining mortar and sniper fire on them.

The Russian diplomat pointed out that the conflict in Syria, and in Eastern Ghouta in particular, is used by western countries only to "produce endless accusations against Russia," while "doing nothing" to improve the situation in Syria. "What's being done - is a political issue, caused not that much by concerns about the humanitarian needs of the Syrians," Nebenzia said.

The official also doubted the figures on casualties in Syria provided by the UN, wondering about their sources and asking them to be more specific about them next time.