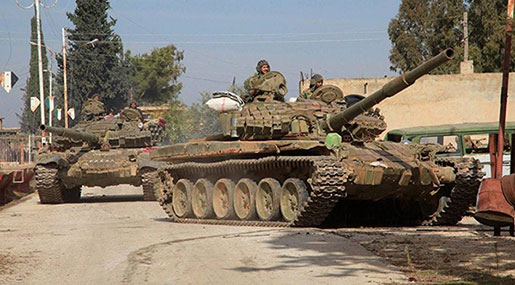 "There is no way to stop. We are making great progress on the ground. The leadership has told everyone that we are determined to cleanse Eastern Ghouta, and now we are getting closer to it, so why stop?"

With these words, a senior Syrian army officer expresses Damascus' insistence on bringing about an end to the presence of militants in the Damascus countryside. Over the last three nights, the army has made significant progress in the areas controlled by the armed factions. The accelerated course of operations highlights the transition to a new stage in which the Ghouta file may be nearing its conclusion.

The Syrian army has succeeded in infiltrating deep into Eastern Ghouta. The army's tanks and soldiers are positioned on the outskirts of Douma, one of Ghouta's largest cities and the main stronghold of the Army of Islam. After three nights of violent confrontations with the militants, the army today is only a few steps away from splitting the Ghouta enclave into two parts, north and south.

The army's plan is coming into view. The next objective is to take control of Misraba and Madira, two key towns in the operation, which will enable the army to meet with other forces stationed in the Vehicles Administration southeast of Harasta. With this, the belt that will separate southern Ghouta from the north will be completed.

In other words, "the belt will separate the militants' command between the Army of Islam in the north and the al-Rahman Legion, the Nusra Front and their accomplices in the south," explained a senior Syrian officer to Al-Akhbar.

Since the beginning of the military operation, the Syrian army has taken advantage of the geography of the open agricultural lands, with the intensity of fire, to advance and to gain the upper hand over the militants. It captured a number of hills and highlands that gave it advantage in monitoring and fire control. From Tal Farzat, the army exposed Hawsh al-Salihiyah and the outskirts of Outaya. Later it took control of them, and then secured the road to the town of Beit Nayem before capturing it. The army also advanced towards the outskirts of Al-Muhammadiyah east of Jisreen. With this the army has already begun breaking the southern part of Eastern Ghouta's pocket and cordoned off the al-Rahman Legion and Nusra Front militants that are positioned in Irbin, Jisreen, Hamuriya, Ayn Tarma, Jobar and the surrounding area. This tactic also pressures the militants into eventually negotiating their surrender in accordance with the conditions set by the Syrian state.

"The operations took place amid the withdrawal of the Army of Islam militants to the more densely populated areas to take shelter," confirms the Syrian army officer. In addition to the confrontations in al-Ab Farms southeast of Duma, clashes between the army and the militants are taking place at the Mashafi axis north of Harasta, where the army is trying to go around the Police Hospital towards the Vehicles Administration, isolating and neutralizing the city of Harasta. Slow advances towards the Reyhan Farms axis east of Duma are also being made to provide protection and support to the forces advancing westward.

Negotiations are Stalled Despite the Messages

Sources confirmed to Al-Akhbar that at present, "negotiations are completely stalled despite the messages sent by the militants regarding their willingness to negotiate."

The militants want negotiations under a cease-fire, which is rejected by the government side that does not mind the negotiations but with the continuation of military action. It has become clear to Damascus, through experience that the militants only go for negotiations when their defeat looms on the horizon.

"The amount of time the insurgents spent hoping and relying on international campaigns cost them an opportunity to get out without losses ... Until now, it seems they have not learned from the experience of Aleppo apart from taking civilians as human shields," the source added.

Al-Akhbar learned from other sources that a clash took place last Thursday after a group of armed men from the Army of Islam in Douma attempted to surrender to the army. Their leadership found out and sent elements to meet them. A clash ensued which resulted in the deaths and injuries from both sides. It ended with no one getting out into the areas controlled by the army. According to a Syrian military source "if this movement continues, it poses a major crisis for the militants, and it will help us in fighting and dividing them. Then negotiate and impose our conditions on them."

Speaking about the negotiations and the exit of the militants, it seems clear that the destination of choice for the exit of the al-Rahman Legion and Nusra Front militants, naturally, is Idlib and its surroundings. But the bigger question today, which Damascus is mulling and one that could cause confusion for negotiations in the coming stages, is "where can the Army of Islam militants exit to?"

"The Nusra Front will go to Idlib. It has a ground ready to receive it, while the Army of Islam cannot be accepted there. They openly view each other as disbelievers. Even Turkey cannot accept the Army of Islam in Idlib," the high-ranking Syrian officer says in replying to a question about a possible destination.

He adds that "there are two proposed options which are being considered. The first entails the exit of the Army of Islam militants to other areas where the militants in control may accept them, for example east Qalmoun. But this is subject to many complex accounts and needs time to be ratified. The second option is that the Army of Islam militants join the Nusra group and al- Rahman Legion, and therefore go out with them or follow them to Idlib."

This does not mean that the option of a settlement between the government and the Army of Islam is closed, but it involves complexities that need to be resolved in advance.

It may seem premature to talk about the negotiations and the exit of the militants from the entire Ghouta pocket. Yet, the collapse of the militants' defenses in record time - no more than two days - could be considered a field shift. The separation of the southern area of Ghouta from the north, sorting out the militants, and therefore negotiating or fighting them separately, facilitates Damascus' task and alleviates a lot of difficulties.