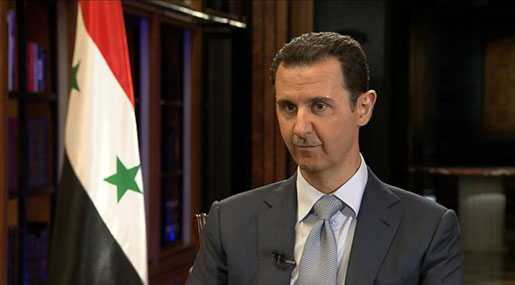 Talks during the meeting dealt with the need to develop a common ground and a clear understanding of the most important outcomes of Sochi Congress, which was agreed upon by the participants, with emphasis laid on the importance of international mediator de Mistura' commitment to his role as a facilitator for the dialogue only.

Al-Assad affirmed the importance of prior and permanent coordination between Syria and friendly countries on various issues at this crucial stage, stressing that the Syrian people are the final decision-makers in any future political options related to their country and this decision will not be in the hand of anyone else.
He further pointed out that the current Turkish aggression on Afrin is a new proof of Turkey's continuing policy towards Syria and a further proof that trusting this policy and its sponsors is not possible.

Besides, he affirmed that the political and media campaign against Syria, under humanitarian titles, mainly aim at arousing terrorism and terrorists after the successive strikes against them.

"We meet with Iranian and Russian delegations in order to tackle the current situation, at the same time, in order to continue the outcomes of Sochi congress and during the coming days, there will be a Russian, Iranian and Turkish tripartite meeting to discuss the situation in Syria," al-Assad later announced in a press statement to a number of media outlets.

As for the UN Security council resolution No. 2401, the Syrian President affirmed that the Syrian Arab army doesn't launch aggression to stop the aggression, but the army is returning stability and defending the people, the mentioned resolution came in its first formula in order to protect terrorists in the face of the Syrian army, but when the resolution came in the current formula, which is relatively good, instructions were given to the terrorists to continue shelling Damascus city.

As for the UN resolution and humanitarian file, al-Assad added that the talk about humanity in the western logic means one thing, which is translated in Syria, that is; the Syrian Army is advancing.

On the truce in Eastern Ghouta and the evacuation of civilians, al-Assad stressed that the majority of citizens in Eastern Ghouta want to get out of the terrorists' shadow into the lap of the State, so, the operation against terrorism will continue in parallel with opening the way for the civilians to get out into the State's regions.

On the fabrications against the Syrian government of using chemical materials against civilians, al-Assad said that the chemical file has become a term of the western lie idioms; and it is not the first time, I believe that we all heard this idiom for the first time in 2012.

"In addition, we abandoned the chemical weapon in 2013 and there is an organization concerned in inquiring this issue, and if there was any evidence, it would announce this thing, so I repeat, it is a mere blackmail which is used as a pretext to direct strikes against the Syrian army," al-Assad said.

As for the massacres perpetrated by the US-led coalition against civilians in Deir Ezzor and Raqqa, al-Assad stressed that the western coalition is simply Daesh's [the Arabic acronym for terrorist ‘ISIS/ISIL' group] air force, regardless of naming, adding that this coalition supports Jabhat al-Nusra, Daesh and other similar terrorist organizations shamelessly.

"The entry of popular forces to Afrin is a normal thing; when there is an external aggression, it is natural that the social spectrum unify when the Syrian Arab army is engaged in the fight against terrorists in other places," al-Assad said regarding the Turkish regime's attempts to enter Afrin.