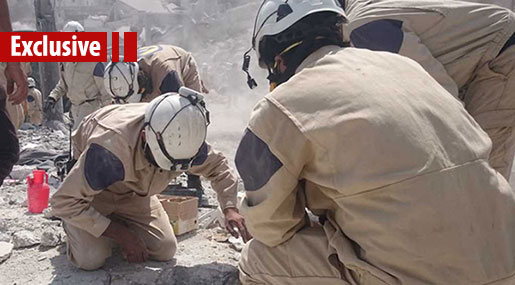 On the eve of every military operation during which the Syrian army expects field results, Damascus has become accustomed to witnessing a bloody event or a chemical theatrical performance that results in casualties including women and children in the area where the army is advancing.

These victims can come back to life after the "political objective" has been achieved. The hoax is designed to curb the army's field superiority. At times, western and Arab media outlets serve the purpose of accusing the Syrian government of committing the bloody attack. At other times, the decision-making circles in the West stir it craftily and with a lot of cliché. The heroes of this theatrical performance are no other than and without any dispute the "White Helmets" who are preparing for a bloody attack in the eastern Ghouta, according to information and confirmed by Syrian government sources to the al-Ahed News Website.

We Deal with Possible Scenarios Seriously

Damascus takes the information it received from "sources" inside Eastern Ghouta about the "White Helmets" distributing chemical protective gaskets seriously. The move is in preparation for fabricating a new film on the use of chemical weapons and blaming it on the Syrian Arab Army.

It also coincided with information about the entry of two trucks loaded with chlorine gas from Turkey into Syrian territory which confirms the "preconceived intentions" to ignite a scenario similar to that of 2013. During that period, the Syrian army was rapidly advancing in Ghouta when images of dozens of victims of women and children were intensely displayed by western and Arab media which portrayed them as victims of chemical gases used by the Syrian government against civilians in Ghouta. No one could provide convincing evidence of these accusations which failed meet any logic when it comes to operations conducted by an army achieving victories using conventional weapons instead of those prohibited by the army's virtues that took into account and still take into account civilians in conflict zone.

A Syrian government source confirmed to al-Ahed Website that "Damascus is closely monitoring all the ongoing operations in the framework of the terrorist groups' preparations to use chemical weapons. It has announced this more than once in the Security Council and informed the Organization for the Prohibition of Chemical Weapons about the existence of chemical weapons in the possession of these terrorist groups that are preparing them to invoke the 2013 events of Ghouta, Khan Shaykhun 2017 and the 2015 chlorine incidents. "

The source clarified to al-Ahed that "the so-called White Helmets are working for the intelligence of western countries under the guise of humanitarian relief and are coordinating with politicized media in order to create convincing plays for Arab and western public opinion. But this does not take away from clear gaps in the coordination processes. This is largely due to their dependence on propaganda campaigns that directly and purely for political reasons ‘criminalize the Syrian government' without the need to further investigate the authenticity of these accusations and their ability to be convincing, which creates a sense of relaxation among the ranks of these groups on the ground that the allegations will first and foremost affect the Syrian government. "

Intimidation will not stop the military operation

The Syrian government source confirmed to al-Ahed that "what the White Helmets are preparing will not dissuade the Syrian Arab Army from resolving the battle of eastern Ghouta with full preparedness for all the chemical scenarios, which can be written by the White Helmets."

"The Syrian army launched an operational survey of the terrain in Ghouta and carefully separated civilians that we are working hard to keep out of harms way from military targets including training camps, operating rooms, and weapons depots that constitute the key objectives," the source added.

The source also stressed that "the fake weeping of global officials over the civilians in eastern Ghouta is in fact the weeping of the terrorist factions that are holding those civilians hostage in a large cage that extends throughout Ghouta. It has locked the door on them and handed the key to the United Nations. The UN's suggestions for a solution in Ghouta including a truce to accommodate the terrorists who delayed the exit of the Nusra from Ghouta to Idlib and allied with it in the attack on the Vehicle Management and the Abbasid Square in Damascus."

The Syrian government source confirmed that "the allegations about the humanitarian situation in Ghouta being out of control is pure slander and intimidation and that the people of Ghouta, who rebelled against Nusra, the Army of Islam and the al-Rahman Legion and attacked the food warehouses there, are eagerly waiting for the arrival of the Syrian army to free them."