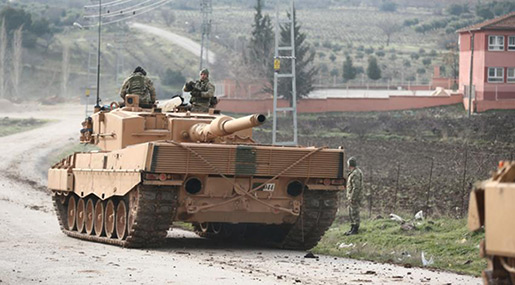 While Damascus has yet to comment on the information, a YPG official previously debunked claims that the Syrian army is set to enter the battle in Afrin.

"Popular forces will enter Afrin within hours," Ikhbariya said, citing its own correspondent.

Earlier in the day, Senior Kurdish official, Badran Jia Kurd, told Reuters that Syrian Kurdish forces and the country's government had agreed on the deployment of Syrian army troops along border positions in the Afrin region to curb the Turkish campaign, and that the military would enter the beleaguered Afrin within the next two days.

"We can cooperate with any side that lends us a helping hand in light of the barbaric crimes and international silence," Jia Kurd said.

He also noted that the accord was purely military, and did not include any political arrangements.

"When it comes to the political and administrative matters in the region, it will be agreed upon with Damascus in the later stages through direct negotiations and discussions," he said.

Last week Rojhat Roj, commander of the Kurdish People's Protection Units (YPG) in Afrin lambasted reports of Kurdish fighters reaching an agreement with Damascus to have Syrian troops deployed in the region to repel Turkish forces.

Meanwhile, YPG commander Sipan Hemo argued that the Syrian army should take most of the responsibility for the defense of Afrin against what he described as a Turkish invasion, calling on Damascus to "immediately send in reinforcements to the border region with Turkey."

Earlier al-Mayadeen, the Lebanese broadcaster, reported that Damascus and the Kurdish militias had sealed a deal, and that the Syrian armed forces were about to enter Afrin to deter Turkish forces.

A source familiar with the situation told Sputnik that the Syrian Armed Forces would enter the territory near the border with Turkey in the district of Afrin in the next few days.

On January 20, Turkey launched an offensive on Afrin, codenamed "Olive Branch," targeting the Kurdish YPG, allegedly affiliated with the Kurdistan Workers' Party (PKK), which Ankara regards as a terrorist organization. Damascus has firmly condemned Turkey's military campaign, calling it a violation of the country's sovereignty.

Syrian state media reported Monday that popular forces are to arrive in Afrin area soon to support locals in facing the aggression launched by the Turkish regime on the area since January 20th.

The arrival of popular forces will strengthen the locals' resilience and resistance against the Turkish aggression which targets infrastructure, public and private properties, and economic and services establishments, the report added.