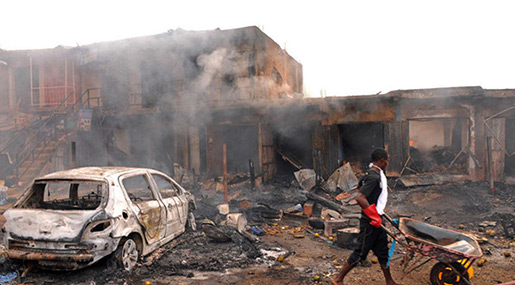 The blasts happened at about 8:30 pm local time Friday in Konduga, some 35 kilometers southeast of the Borno state capital, Maiduguri.

Babakura Kolo and Musa Ari, from the Civilian Joint Task Force (CJTF) assisting Nigeria's military against the Takfiris, said the bombers were all men.

"We have 19 dead and about 70 others injured... Two of the bombers attacked the Tashan Kifi fish market. Then four minutes later, a third bomber struck nearby," said Kolo.

"The victims included 18 civilians and one soldier. The Tashan Kifi is an informal market which serves as an eatery, market and also hang-out for residents."

Ari said 22 of the 70 injured were in a critical condition, adding: "There is no question as to who did it: Boko Haram has targeted Konduga several times."

There was no immediate comment from the military or the police in Borno state, which has borne the brunt of the violence in Boko Haram's nearly nine-year insurgency.

At least 20,000 people have been killed and more than 2.6 million others made homeless since 2009. Nigeria's military and the government maintains that the group is a spent force.

But suicide attacks and raids persist, with civilians in hard-to-reach rural areas and outlying towns at risk.

On January 31, two female suicide bombers blew themselves up at Mandarari village, near Konduga.

The blasts happened shortly after another bomber killed four and injured 44 at a displaced persons' camp in Dalori, 22 kilometers away on the same road to Maiduguri.

A fourth bomber also blew herself up outside the camp.