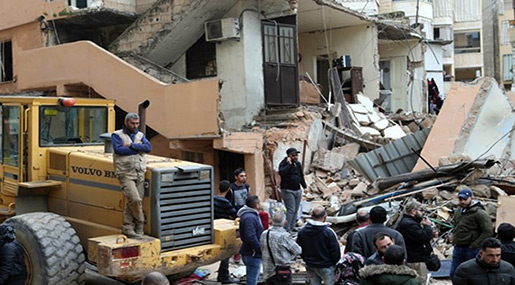 Two people were killed and another was injured when a building collapsed early Thursday morning in Beirut's Burj al-Barajneh suburb, a security source said.

A 7-year-old girl named Sally her mother Zeinab were identified as the victims. Sally's father reportedly survived the collapse but was taken to the nearby Rasoul hospital in a critical condition. Zeinab reportedly succumbed to her injuries at the hospital.

The aging, 50-meter-high building consisted of one commercial floor and one residential floor, most of which "caved in," the source said.

The incident occurred at around 4:30 a.m. and the Civil Defense and Internal Security Forces concluded their search by the break of dawn.

The building's owner, Zeinab al-Anan, told local media, "We were not informed by the municipality that the building was in danger of collapse."

Atef Mansour, Burj al-Barajneh's mayor, told local media that his municipality had been issuing warnings for unsafe buildings, though he did not specify if a warning was issued for this particular building.

"There are many buildings in Burj al-Barajneh that need to be repaired ... the state has to find solutions to this problem," he said.

The head of the Higher Relief Committee Maj. Gen. Mohammad Kheir also visited the site, saying that an allowance for accommodation would be paid to the local residents affected by the incident. He also confirmed that the building was irreparable, and would need to be demolished.