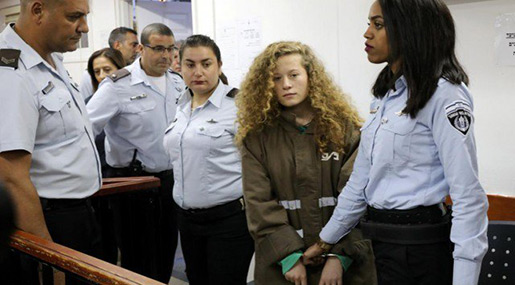 I had barely fallen asleep when I woke to find an armed "Israeli" soldier hovering over my bed. He told me to get up quickly and put on a jacket. Half asleep, I was handcuffed, thrown into an army jeep, and taken to be interrogated. They had already taken my 16-year-old cousin, Ahed, the night before, and now it was my turn.

A few days earlier, the "Israeli" army raided our town of Nabi Saleh in the occupied West Bank to suppress our weekly demonstration against the illegal Jewish settlement built on our land and the theft of our fresh-water spring by settlers. During the demonstration, a soldier shot our 15-year-old cousin Mohammad in the face from close range, shattering his skull. He was rushed to the hospital and had to be medically induced into a coma. About half an hour later, still traumatized by what happened to our cousin, we found soldiers in the front yard of Ahed's home where we were sitting and tried to get them to leave. For demanding they leave, my unarmed cousin is now facing charges for confronting an armed soldier.

When a video of the encounter was shown in "Israel", it went viral and many "Israelis" demanded that we be punished. So, the following week, soldiers came to Ahed's home in the middle of the night and she was taken away to prison. The next day, her mother Nariman was also imprisoned when she went to check on Ahed. Later that night, I was arrested as well.

I was released on bail after 16 days, but Ahed has now been languishing in prison for nearly two months, as has her mother. On Jan. 31, she spent her 17th birthday in a cell. The start of her trial in a military court has been delayed several times. The latest postponement came on Tuesday, when it was rescheduled for March 11. In a blatant attempt to avoid the scrutiny of the international media, the judge also ruled that journalists will be barred from attending. The charges that Ahed faces carry a maximum sentence of 20 years. I still face charges as well.

In prison, we were treated very badly. After being arrested, Ahed was taken into a basement cell and interrogated without a parent or lawyer present. She and I were repeatedly moved from one prison to another, held with regular "Israeli" criminals, and subjected to sexist and degrading verbal harassment. The army knows how to place psychological pressure to break you. They deprived us of sleep and food, and I was forced to remain seated in a chair unable to move for long hours at a time.

When we were brought to military court for a hearing, it was very hard seeing our parents sitting in the back feeling worried and helpless. My uncle Bassem Tamimi, Ahed's father, and my own father know firsthand what "Israeli" prison feels and smells like. Both have been imprisoned multiple times because of their nonviolent resistance to "Israel's" occupation. Bassem was named a prisoner of conscience twice by Amnesty International, which has also called for Ahed's release. They know that we were held in a freezing-cold cell as we waited for our hearing. They know the pain of the handcuffs as they are tightened on our wrists and ankles, and how dirty the cells are, and the smell of rotten food. They understand what it feels like to be isolated in a cell - completely alone, cold and frightened, unsure of what will happen to you. Like her parents and siblings, I fear for the well-being of Ahed and the more than 300 other Palestinian children currently imprisoned by the "Israeli" army.

Ahed and I are the second generation of Tamimis to spend our whole lives under "Israel's" oppressive 50-year military rule. We grew up under the constant watch and control of "Israeli" soldiers. At a young age, we had to learn resilience, determination and persistence. In order to survive, we had to be acutely aware of our surroundings at all times. Even the most basic things, such as being able to move freely or take a day trip wasn't a possibility because of military checkpoints and other impediments. We had no room to breathe - sometimes literally, as clouds of tear gas fired by soldiers engulfed us and filled our homes.

Sadly, we are used to soldiers forcing their way into our homes, their cameras clicking as they take photos of the males in the family, documenting how many windows and doors we have, and stealing and destroying our personal belongings. There is no privacy. In addition to my father, my mother and brother have also been imprisoned. Ahed's uncle was shot and killed by soldiers during a demonstration in 2012, while her mother was shot in the leg during another march and developed asthma because of the tear gas.

We have had our childhood stolen from us, never knowing the feeling of safety, security, and quiet. The unfortunate truth is that this isn't only the reality of Ahed and I, or of Nabi Saleh. It is the reality of most Palestinians, especially the young ones.

Each year, "Israel" prosecutes between 500 and 700 Palestinian children in its military courts, which have a conviction rate of more than 99 percent. "Israel's" two-tiered legal system in the occupied West Bank has been condemned as "separate and unequal" by human rights groups. Settlers, including minors, are subject to "Israeli" civilian law while Palestinians of all ages are subject to martial law.

Palestinian children in "Israeli" military prisons endure systematic abuse - including threats and physical violence - and are pressured to sign confessions in Hebrew that they can't read, all while being interrogated without a parent or lawyer. These abuses have been well-documented by human rights groups, and even members of the US Congress are now taking action to stop them with a bill that's intended to make sure American aid doesn't fund "Israel's" imprisonment of Palestinian children or violations of their rights.

We cannot stand up to "Israel" alone. The international community and all people of conscience must also stand for justice and not tolerate "Israel's" abuses of our rights, especially against children. I imagine my life without the hardships of "Israel's" military rule, enjoying the simple liberty of being able to make it to class on time because there is no checkpoint closing my town. Not having to worry about me or my loved ones being killed, injured, or thrown into a military prison for standing up for our rights. Like all people want, we simply want to be able live in freedom.

Nour Tamimi is a journalism student and activist from Nabi Saleh in the occupied West Bank.