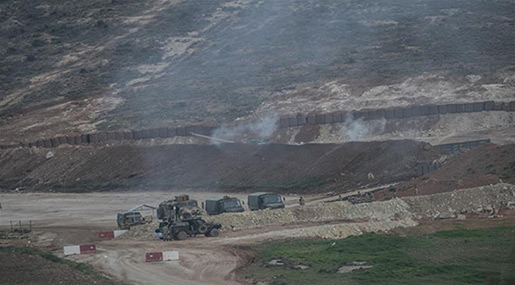 Turkey resumed air strikes on the Kurdish-controlled enclave of Afrin late on Thursday after four days of not flying over the besieged northwest Syrian district following the shooting down of a Russian fighter by Turkish-backed insurgents in Idlib province.

The resumption of Turkish air strikes on Afrin came hours after a telephone call between Turkish President Recep Tayyip Erdo?an and Russian President Vladimir Putin in which, the Kremlin said, they discussed military coordination in Syria.

The pro-Kurdish Hawar News Agency said on Friday the civilian death toll from the Turkish offensive against the Kurdish People's Protection Units (YPG) forces had risen to 149.

Turkish Foreign Minister Mevlüt Çavu?o?lu said this week there had been no civilian casualties at all as a result of his country's operation in Afrin.

After more than two weeks of aerial bombardment, the strikes stopped on Sunday, a day after Turkish-backed insurgents shot down a Russian warplane over Idlib, to the south of Afrin, where Russian-backed Syrian Army troops are engaged in an offensive to retake the province.

Turkey says it aims to rid Afrin of the YPG, which it says is part of the Kurdistan Workers Party (PKK) that has been waging an armed campaign inside Turkey for more than three decades.

The United States has hundreds of Special Forces troops aiding and training the so-called Syrian Defense Forces [SDF] in eastern Syria, but none in Afrin. Washington has called for Turkey to show restraint in Afrin and not to attack the YPG and SDF elsewhere.

Meanwhile, both Iran and the Syrian government have criticized the Afrin offensive, with Iranian President Hassan Rouhani calling on Turkey to halt the operation.

Russian Deputy Foreign Minister, Oleg Syromolotov on Wednesday warned of further destabilization of the region, but blamed the United States for backing the Kurds.

"The developments of the situation in Afrin, provoked by the actions of the United States among other things, can lead to even greater destabilization in this region," Syromolotov said.