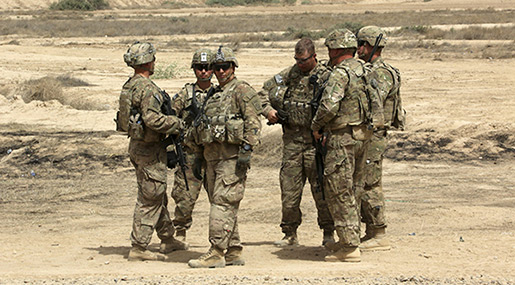 Now that the Wahhabi Daesh [Arabic acronym for "ISIS" / "ISIL"] have been squeezed from all but the last bits of their former territory, the Trump administration is struggling to define the boundaries of its mission, and how and when America's lengthy engagement will end.

A crisis between the US and Turkey, triggered by the latter's new military offensive in Syria, has laid bare how a dizzying array of alliances in Syria is growing even more convoluted in the absence of Daesh as a major force. Either the Americans must abandon the Kurds who fought alongside them in Syria, or a profound rift with a NATO ally appears all but inevitable.

As Daesh recedes as an immediate threat, the legs of that argument are falling away, fueling growing Turkish outrage that even the Trump administration acknowledges has some merit.

"This is a tough circle to square. It's the ultimate in heavy diplomatic lifting," said Frederic Hof, who oversaw Syria policy in the Obama administration's first term and is now at the Atlantic Council.

Daesh's retreat also has forced the US to stretch thinner its legal rationale for operating in Syria. Doing so has raised delicate questions about whether Congress and the American people have truly signed off on a mandate for Syria that goes far beyond killing terrorists.

Senior Trump administration officials said they need no additional authorization to be in Syria because Daesh remains a serious and persistent threat, requiring a continued US presence to ensure it doesn't regroup and again imperil Syria's future. To keep Daesh on its heels, America's military, diplomats and aid workers will work to stabilize the country and restore basic services in areas freed from Daesh control, while trying anew to engineer a political solution to the intractable war whose chaos Daesh so effectively exploited.

Such arguments create another problem, especially for a president often eager to claim successes: Trump cannot declare victory of any sort against Daesh in Syria without empowering those who argue Daesh's defeat means the US has no business staying in Syria.

Small pockets of Daesh militants still active in eastern Syria back up the US justification - for now.

The US sees another threat in al-Qaeda's potential resurgence.

Furthermore, War Secretary James Mattis chastised Turkey for its offensive against the Kurds.

Turkey's angst about growing Kurdish strength near its border boiled over in recent days with the Turks launching a military operation against Afrin, a Kurdish-held enclave in northern Syria.

Turkey considers Syrian Kurdish forces to be intrinsically linked to the PKK, an insurgency the Turks have battled for decades.

Turkey and the Kurds, who led the offensive to retake the former Daesh capital of Raqqa, feel entitled to US support. So the Trump administration has tried to split the difference, acknowledging Turkey's security concerns while urging "restraint." That balance hasn't quelled the situation.

"The violence in Afrin disrupts what was a relatively stable area of Syria," Mattis lamented in Indonesia. "It distracts from the international efforts to ensure the defeat of ISIS."

For the Kurds, an ethnic minority in multiple countries of the region who've been abandoned by more powerful allies before, the result could be worse than distraction. The UN says an estimated 5,000 people have been displaced by fighting in northern Syria, and it's unclear what the US is willing to do to calm the situation.

Asked if Washington had a moral obligation to the Kurds, senior US officials who briefed reporters on condition of anonymity said Trump's "America first" doctrine dictated that the US always prioritize its own interests.