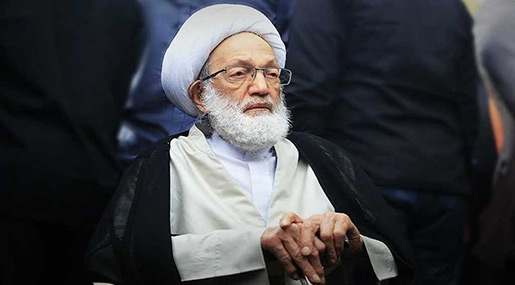 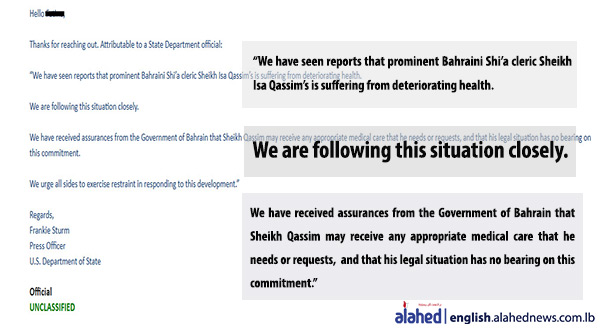 Earlier, the US State Department revealed that it received "assurances" from the regime in Manama that "Sheikh Qassim may receive any appropriate medical care that he needs or requests".

In a written statement to LuaLua English website, which al-Ahed news was able to attain, a State Department official said that Washington was "following this situation closely".

But the Bahraini opposition source called on the international community to adopt a "more serious approach" when dealing with the situation in the Gulf kingdom, warning that Sheikh Qassim's health is worsening.

The source also voiced the nation's growing concern over the cleric's deteriorating condition, which comes amid the absence of an international role in the crisis and Manama's complete disregard for appeals to free Sheikh Qassim from house arrest.

Earlier today, Bahraini sources told al-Ahed that Sheikh Qassim is still in his residence, as reports of a regime ambulance being sent to his house, while its mercenaries were on high alert.

"Al Khalifa regime sent an ambulance to ask the Sheikh's family about his health without providing His Eminence with any treatment," sources told al-Ahed news.

The same sources explained that the ongoing events surrounding Sheikh Qassim's house "is a deliberate play by the regime".

The cleric's health deteriorated on Sunday after more than 500 days of living under virtual siege in Bahrain's Diraz.

"Sheikh Qassim still needs a team of medical consultants and a number of surgeries," al-Ahed News quoted sources as saying.

Accordingly, the prominent Shia cleric was conditioned by the Al Khalifa regime to be treated in the poorly equipped al-Qalaa Hospital, which happens to be part of the Bahraini Interior Ministry.

Ayatollah Qassim had refused to accept medical treatment from an unreliable side, as his family does not trust any treatment that comes on behalf of those who find comfort in his death. What was proposed is that he get treatment from an international team of doctors.