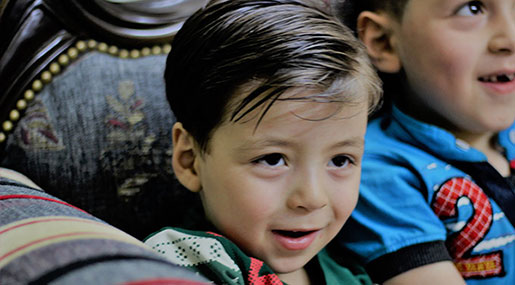 
Omran Daqneesh, a bewildered, injured child, extracted from the rubble in Aleppo, "the symbol of Syria's suffering," has been proven to be a propaganda heist, highlighting the exploitation of children as war advocacy tools. 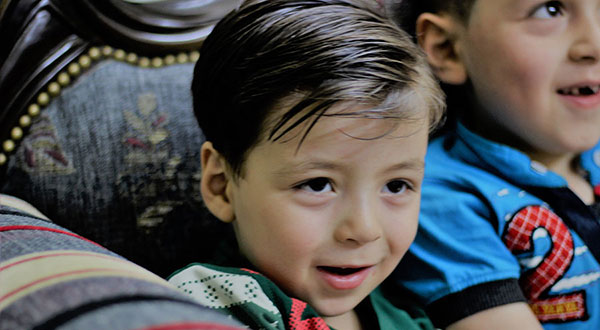 In August 2016, Omran covered in dust, blood seeping from a wound in his head sat alone on an orange seat in an ambulance. Nobody attended to this traumatized child, the whirr-click of cameras could be heard from the photographer, Mahmoud Raslan. CNN anchor, Kate Bolduan broke down in tears as she described Omran's pitiful image.

The multi-million dollar NATO and Gulf state funded, Al-Qaeda affiliated, White Helmets were portrayed yet again as the saviors. The photographer, Raslan, won the Getty Defining Image award in 2016 despite clear evidence the picture had been "staged." Bette Lynch of Getty Images dismissed such concerns:

"No I don't [think we should question the image]..and I think it comes back to the truthfulness of imagery and where the images are sourced from and that they are reliable photojournalists."

Raslan, the "reliable photojournalist" had already been exposed to be a member of US funded, Nour Al Din Al Zinki, an extremist faction in Syria, responsible for the public torture and beheading of a 12-year-old Palestinian child, Abdullah Issa, a month before Omran's image went viral in Western corporate media.

One lesser known aspect of this entire propaganda campaign is the existence of the other Omran. Another victim of this attack on a residential area of East Aleppo had initially been chosen to unwittingly symbolize the "suffering of Syria."

23-year-old Ahmad was the first to be placed on the orange seat before smaller and cuter Omran was seen emerging from the debris and the White Helmets seized Omran and evicted Ahmad. THE photo was created, specifically, to pump up the pathos volume for Western audiences. Objective: NATO "no fly zone" and deceleration of the Syrian Arab Army advance toward the full liberation of East Aleppo from its Nusra Front-dominated, Western backed, terrorist infestation.

"Ahmad had an injury to his head and arm and was the first to be placed in the ambulance before Omran appeared. Then, the White Helmets replaced Ahmad with Omran," says Abu Omar, Ahmad's father.

When I went to East Aleppo in July/August 2017, I met Ahmad's family, and they told me the story. Ahmad is now an SAA soldier based in Palmyra, battling ISIS [Daesh].

Abu Omar was a builder by trade who had built six houses in the Al Qaterji district of East Aleppo, one for each of his six sons. Abu Omar told me:

"This is the main reason we stayed here when the terrorists invaded in 2012, we refused to abandon our property. Nusra Front only arrived in 2015, before that various groups operated in this area, Khateab Abu Amara was one of them. We stayed even though all the militant groups threatened us, called us Shabiha."

"Shabiha" is the derogatory term, employed by the Western backed extremist factions to describe anyone who dares to support the Syrian state and the Syrian Arab Army. Abu Omar and his family came originally from Jibreen, an area of Aleppo traditionally loyal to the Syrian government. Abu Omar continued:

"In 2012, these militant groups tried to take over the [Madrassa Jihad] School in the area, as a military center. We rose up against them and prevented the occupation.

In 2013 they pounded our homes with mortars from the Eye Hospital in the adjacent Al Sh'ar district. In 2016 Nusra Front took control of the school."

At this point, I interjected and asked Abu Omar if he believed the attack that led to Omran's iconic image had been a Syrian or Russian airstrike as conveyed universally by Western corporate media.

"No, no it was not an airstrike. The terrorists were always targeting this area because of our loyalty to the government. They had already laid explosives in three of the houses I had built for my sons. They deliberately destroyed my property. On that night they had targeted our area with mortars."

This information had previously been corroborated by Omran's father:

"Mr. Daqneesh himself told me that evening he had heard no warplanes, and when hounded by terrorist-supporting media to say that it had been an airstrike, he challenged them to show him the remainders of the alleged airstrike munition. He said they had refused," Eva Bartlett wrote.

Abu Omar went on to paint a harrowing picture of life under terrorist occupation which differs wildly from their portrayal as "freedom fighters" and "moderate rebels" by NATO-aligned media and NGOs.

"Toward the end of January 2015, a van pulled up outside our home with masked fighters inside. They arrested five of my sons. Mohammed, Omar, Hossam, Ahmad, and Younis. They claimed my sons had given coordinates of their locations to the Syrian air force."

Abu Omar told me that Ahmad and Younis were released almost immediately due to "lack of evidence," but his other three sons were not so lucky. After a distressing time trying to ascertain where his sons had been taken, Abu Omar received ‘intelligence' they had first been taken to the Al Sh'ar Mall, a building occupied by Abu Amara and Nusra Front, from there to Idlib and finally to Haritan, N. Aleppo, for interrogation under torture.

While Abu Omar spoke, his wife sat next to him and held the photos of her sons in her hands. She prayed and wept quietly. On the sofa sat two young girls who listened attentively.

Abu Omar described going to Haritan and seeing his son, Omar, with electric shock-treatment bands around his wrists and neck. He said the majority of the wardens were Saudi:

"They showed me a confession signed by a Saudi Sheikh, claiming my sons were "kafirs" [apostates]. They told me that my sons had been sentenced to death. At first, I refused to leave, but a Syrian fighter forced me to go home. I asked him how he could murder his own people at the command of a Saudi foreigner. He would not answer me."

Visibly moved, Omar described the execution of his three sons:

"They killed Hossam first. They put a bullet in his back that passed through his stomach. We still don't know where or when he was killed, but they told us to collect his body from the Bayan Hospital, Al Sh'ar. After eight months Mohammed and Omar were publicly executed in the Sid Al'Ose market place in the Al Sh'ar district."

Abu Omar's wife handed me the precious photos of her sons, she pointed to the younger of the two girls on the sofa:

"She still calls for her Baba every night," her voice trembled with emotion.

The child's father was Hossam, 26, the youngest of the three brothers and she was his only child. Omar, 31 left behind two boys and a girl. Mohammed, 27, two daughters. The US-led coalition backed terrorists had torn the heart out of this family in the name of "freedom."

Abu Omar's sons were executed in August 2016 as the battles for the liberation of East Aleppo raged. Hamad Showa, the local Nusra Front leader, had repeatedly threatened Abu Omar with assassination for his unwavering support for the Syrian state and army.

"He told me he wanted me dead before liberation."

After months of fierce street to street fighting, the SAA began to make serious inroads toward victory. Around the 4th of December 2016, Abu Omar was sent a message to collect all their valuable belongings and to leave for the Tarek Al Bab crossing into West Aleppo.

The terrorist shelling and rocket fire had intensified as they left, 15 families in total.
"They didn't want anyone to get out alive," said Abu Omar.

They walked for two hours through the fierce street battles between the SAA and terrorist factions. Suddenly, Abu Omar told me:

"We saw two fighters in uniform, but we couldn't be sure if they were SAA or terrorist, it was hard to tell. They signaled to us to enter a building, inside we saw the houses were connected from when the terrorists had knocked holes in the walls to create an urban tunnel for them to pass safely during SAA attacks. We passed through the ‘tunnel'..."

At this point, both Abu Omar and his wife began crying, sobs wracked their bodies. I went and held her hand, she put her head on my shoulder and wept uncontrollably:
"We passed through all the houses, and suddenly at the end of the "tunnel," we could see the Syrian flag, our flag. We broke down, we were safe, at last."

This story is not unique, it is one told by the majority of families who escaped, alive, from the US coalition proxy occupation of East Aleppo. It is a story that is airbrushed by the mainstream media who abandoned their sinking Aleppo narrative once it became apparent their "freedom fighters" had been exposed as executioners & terrorists.

I asked Abu Omar's wife to give me one message for people in the West:
"Let Syria live. Before we were safe - before the West supported terrorism in our country."