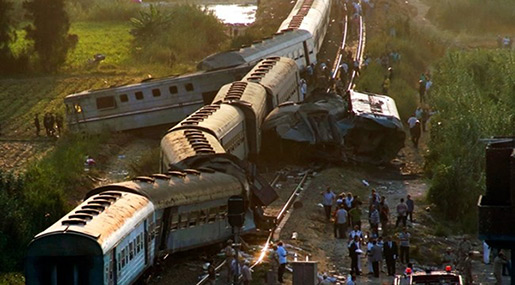 Two trains collided in Egypt's coastal city of Alexandria Friday, killing at least 41 people and injuring 123 others, the Health Ministry said. One eyewitness said the two trains mounted into the air "forming a pyramid" after slamming into each other at a suburban station on the edge of the Mediterranean port city. 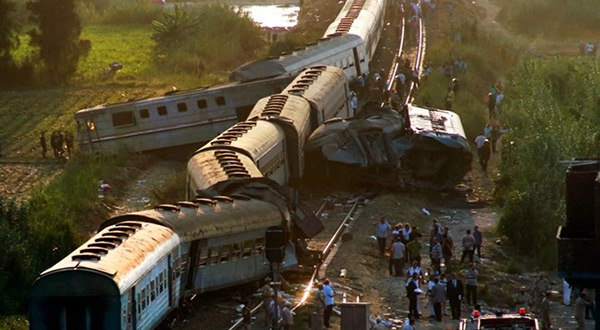 President Abdel-Fattah al-Sisi sent his condolences to the victims' families and ordered authorities to establish who was responsible for the crash, which left bodies strewn on the ground around wrecked carriages.

The collision at 2:15 p.m. local time near Khorshid station at the edge of Alexandria derailed the locomotive of one train and two cars of the other, the Egyptian Railway Authority said.

Transport Ministry officials, quoted on state television, said the crash was probably caused by a malfunction in one train that brought it to a halt on the rails. The other train then crashed into it.

However, a security source said a railroad switching error most likely caused the crash, without giving further details.

One train had been heading from Cairo to the northern city of Alexandria and the other from the canal city of Port Said, east of the capital, to Alexandria.

One resident, Hoda, was standing on her rooftop when she saw the trains collide. "They rose in the air forming a pyramid when they collided," she said. "I started to scream from the rooftops for people to grab some sheets and run."

A Health Ministry spokesman said 75 ambulances had been deployed at the crash scene.

State television showed dozens of people crowding around the damaged train cars, with bodies strewn on the ground.

The dead and injured were initially placed on blankets in a field beside the tracks running through farmland on the outskirts of Alexandria.

"The train I was riding was going very quickly," passenger Moumen Youssef said. "I found myself on the floor. When we came out, we found four train cars crushed and a lot of people on the ground."

Egyptians have long complained that successive governments failed to enforce basic safeguards for the railways, leading to a string of fatal crashes.

In Egypt's worst train disaster, a fire tore through seven carriages of an overcrowded passenger train in 2002, killing at least 360 people.