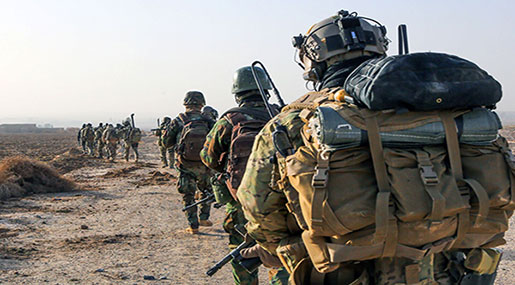 All American red lines in Syria are no longer feasible. The decision by Damascus and its allies to reach the Iraqi border was implemented. Three airs raids did not deter them from moving ahead with their plans. A "collision prevention line" was laid with the Americans - in understanding with the Russians - in the vicinity of al-Tanf. But the race towards the border was impeded to a corridor of tens of kilometers, blocking the road for the Americans and their allies north of al-Tanf. 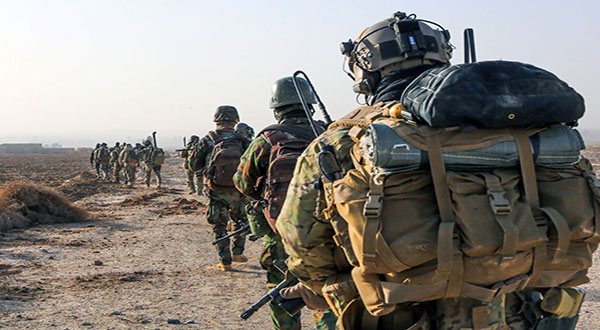 Syria's Badia witnessed one of the most significant changes in the country's more than six-year long war. The arrival of the army and its allies to the Iraqi border indicates significant repercussions on a regional level, especially as it came under the shadow of a political, security and military rift with Washington. Since the beginning of the Badia operations, the plan for Damascus and its allies was clear. Its main objective was the common border with Iraq. The allies divided the battlefield and began operations from the al-Silmiya countryside [linking Aleppo countryside to the east] to the Suwayda countryside in the south. The strategic battle from Badia to the border placed the commander of the Quds Force in the Iranian Revolutionary Guards, Qassim Soleimani, in the Syrian operations room and among the advancing forces on the ground.

Soleimani's presence as well as the sense of inevitability over the decision to move toward the border put Washington in a predicament. Practically, there was no deterrent to the Syrian decision except what the US administration planned for Badia, which is linked to the border, and its repercussions on the besieged city of Deir al-Zour. In their statements to ‘Al-Akhbar', field officials have repeated the same phrase: We will not allow the Americans to hold the full border, whatever the cost. We are ready for a cliffhanger.

A week ago, Al-Akhbar reported that Syria and its allies had decided to open a ‘corridor' stretching tens of kilometers to reach the border - about 55 km north-west from al-Tanf. Three US raids serving as a reminder of the ‘red lines' did not affect the progress of the plans. After each strike, the army and its allies were redeploying and then advancing to the site of the raid itself, continuing to work to reach the border.

The messages that the Americans sent to the forces that continued to advance were delivered with a degree of caution, not to force the targeted party to respond. From here, these strikes/messages were less than a slap. On the other hand, the continued progress of the forces sent an important message that reached the American decision-makers - these strikes would not deter or impede their continued progress. Consequently, the US had to raise the level of aggression to show its determination and willingness to go to a "more dangerous wave" even if it led to a major confrontation. . But the counter-messages directed by the axis of the resistance, coupled with the continued progress, were significant.

It seems that Washington and its military leadership understood that any attempt to walk towards the brink of confrontation would lead to a real clash. Therefore the US decision-making body had to make a choice: Is it ready for a confrontation at this stage or not? If the answer is yes, it can follow an upward path ... otherwise retreat is safer.

The alternative option, which was theoretical in nature, was the possibility of landing American forces, which would have served as an obstacle to the Syrian forces and their allies. Hence, the direction of the rapid advance.

On the other hand, in light of the determination shown by Syria and its allies, the American also had to take into account the scenario of confrontation. But in any case, the allies quickly took the lead before the United States. And this progress was extremely quick and surprising.

One of the field commanders tells Al-Akhbar that, "the operation was a continuation of the efforts to block the US forces from expanding northward in Badia, and thus controlling the border." He notes that "following the developments that took place on the road leading to the Al-Tanf crossing, which saw three American raids, a decision was made to reduce tensions and escalations on the road to Al-Tanf. Thus, leaving Syria and its allies with the option of cutting off the road for Washington and encircling its forces and isolating them from the northern part of Badia. That was the operation that began [on Friday]." He adds "the progress was difficult. The forces engaged in violent clashes with Daesh militants, who have exhausted their military capabilities in the region. Through this control, the army and allies have a military advantage as the area they intend to progress in was exposed and most of it was under their control."

Thus, the Syrian army forces advanced from the areas they recently took control of in the vicinity of Bir al-'Asi (south of T3 station, east of Palmyra), towards the east stretching to Umm al-Salaabeh and Abar Sijri (this area is approximately 23 km north of Zakf site where the US special forces accompanied by fighters from the faction of the "Commandos of the Revolution" were stationed and were targeted the day before yesterday by a drone). The army then headed southeast, advancing towards the border with Iraq and reaching a border guard post.

Now that the taboo has been achieved - from an American and Israeli perspective - the ball is in Washington's court. It has many options. One of which is giving into reality and staying in al-Tanf and the 55 km limit as a safe area for their forces and allied groups.

The option of targeting Syrian forces on the border remains a possibility. But this time any raid similar to previous raids will not be valuable, as it will not affect the equation on the ground. Therefore, the option of major strikes would be like a declaration of war, which could be unacceptable for Washington, in light of the messages Moscow conveyed to them that Damascus and its allies will not stop their campaign.

In response to a question by Agence France-Press, the coalition did not comment directly on the Syrian progress, but stressed that "what the pro-regime forces are doing near (the positions) of the coalition and its partners ... continue to worry us, and the coalition will take the appropriate measures to protect its forces."

In this context, Russia was politically clear in supporting the Syrian move. At the headquarters of the Ministry of Defense in Moscow, the first map showing the arrival of Syrian troops to the border appeared, isolating American forces and their factions from the areas of ‘Daesh' control.

The Moscow-backed move also agrees with the unspoken understanding with Washington that "the division of influence in the border area with Iraq, which has guaranteed the US a margin of 55 kilometers in the vicinity of al-Tanf."

The Commander of the Russian forces in Syria, Sergei Surovikin, said that the Americans "start their movements from ridiculous assertions that government forces pose a threat to the bases and camps training the opposition gunmen in southern Syria." He added that as a result, the coalition aircraft and its fighters have obstructed the operations of the Syrian forces, which "set up border posts along the frontier with Iraq, from the northeast of al-Tanf to al-Bu Kamal."

"This is a violation of Syria's sovereign right to protect its borders." He said adding that the Russian leadership "is doing its utmost to prevent the clash of the two parties and to ensure the security of the positions of the Syrian forces." He concluded that the Syrian forces are continuing their operations to take control of the border with Jordan and Iraq.

In Iraq, the ‘Popular Mobilization' forces (Hashd al-Shaabi) are continuing their military operations. They are stationed at the Syrian border, starting from the town of Um Jaris in the north to the Tel Safok crossing to the south. This means that 55 kilometers of the border has been liberated. The Popular Mobilization Units' plan is expected to include a southern push, bringing troops up to the al-Qaim and al-Walid crossings, where they will meet Syrian forces. The information adds that the line of progress of the ‘Hashd' forces will move in two directions. The first will be from the north to the south - from Tel Safok reaching the al-Qaim crossing. The second direction will be from the east to the west, specifically from the areas around the town of Al-Rutba, expected to have concentrations of the ‘Hashd' forces, which will take off from there to meet the Syrian army (towards the Al-Waleed crossing). Neither of the two sides will cross the border.

As a result, Friday's events add a column to the equation that was founded by establishing the rule of Damascus and its regime, and a new loss to Washington as it mitigates the effects of "beyond Aleppo and securing the capital and its surroundings". The resistance axis laid a new line in the big equation: the joining of arms is near.