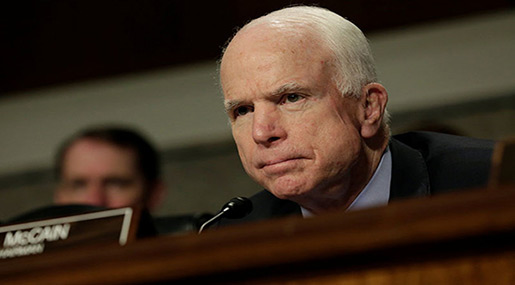 US senator John McCain stated that "Russian President Vladimir Putin is a bigger threat to world security than the Wahhabi Daesh [the Arabic Acronym for the terrorist "ISIS"/ "ISIL"] group. 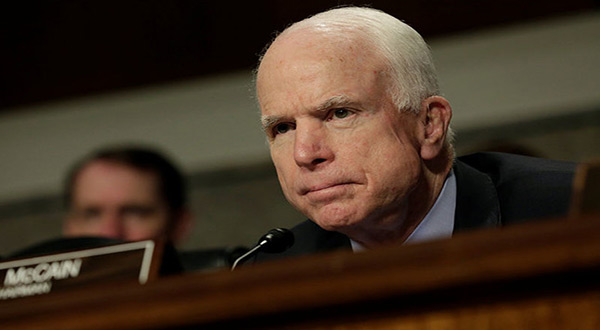 The Republican also admitted in an exclusive interview with 7.30 that President Donald Trump sometimes made him "nervous".

During a visit to Canberra, McCain said Putin was the "premier and most important threat, more so than ISIS".

"I think "ISIS" can do terrible things. But it's the Russians who tried to destroy the fundamental of democracy and that is to change the outcome of an American election," he said.

"I've seen no evidence they succeeded, but they tried and they are still trying to change elections.

He further added: "They just tried to affect the outcome of the French election. So I view Vladimir Putin - who has dismembered Ukraine, a sovereign nation, who is putting pressure on the Baltics - I view the Russians as the far greatest challenge that we have."

He said the US needed to respond to Russia with sanctions.

"We have done nothing since the election last November to respond to Vladimir Putin's attempt to change the outcome of our elections. So, way to go Vladimir. We haven't responded at all," he said.

In parallel, Mccain stated: "Hopefully when we get back from recess the Senate will enact sanctions on Russia."

"I am nervous from time to time," he said. "I do believe that the President has great confidence in the national security team. I do believe most of the time that he accepts their advice and counsel.

"I don't think there's any doubt that this FBI issue and the whole issue of the Russians, it's a scandal of significant proportions and it's going to be with us for quite a while.

"I hope we can separate that issue and all its ramifications from the need for us to win in Mosul, to win in Afghanistan, win in Raqqa and beat back this threat to our nations' national security, which we just saw a manifestation of the problem in Manchester."

On allegations that White House adviser Jared Kushner discussed a secret communication channel with Russia, McCain said: "I don't like it, I just don't."

Senator McCain also said North Korea had the potential to become a "very serious crisis along the lines of the Cuban missile crisis, unless we do everything we can to restrain North Korean behavior".

"The key is China. China can restrain North Korean behavior," he said.

"I don't think it's acceptable for the United States of America to have an intercontinental ballistic missile - or a missile aimed at Australia - with a nuclear weapon on it, and depend on our ability to counter it with an anti-missile capability."