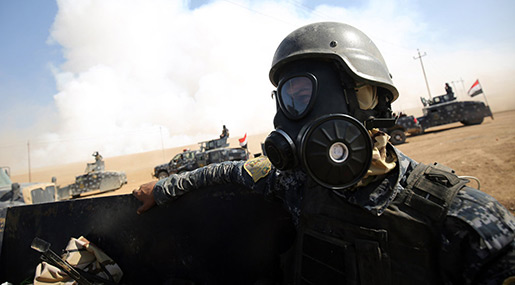 The US military has confirmed that the Wahhabi Daesh [Arabic acronym for "ISIS" / "ISIL"] terrorist group launched a chemical offensive against advancing Iraqi forces in the flashpoint city of Mosul over the weekend. 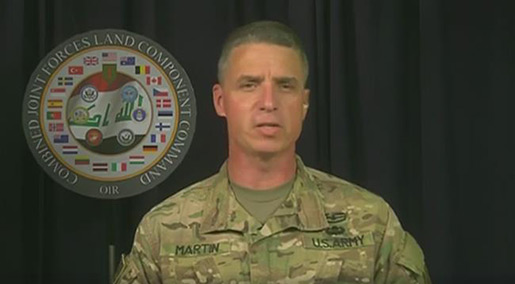 On Wednesday, US Army Major General Joseph Martin, the commanding general of the so-called Combined Joint Forces Land Component Command-Operation Inherent Resolve, said via videoconference from the Iraqi capital of Baghdad that the chemical attack had been launched but had caused no fatalities.

"The Iraqi security forces... were in vicinity of one of the strikes," Martin told reporters, adding, "They were taken back for the appropriate level of medical care... Nobody's been [fatally] impacted. Nobody's died."

Martin, however, said that the agent used in the attack had not been identified "at this time."

"We have sent it back for testing but we're still waiting for the outcomes," he said.

The foreign-backed terrorist group, which seized Mosul in June 2014, had so far carried out numerous chemical attacks against both Iraqi forces and civilians.

Iraqi forces retook control of eastern Mosul in January after 100 days of fighting and launched the battle in the west on February 19.

Iraqi army soldiers and pro-government fighters from the Popular Mobilization Units, have made sweeping gains against the Wahhabi elements since launching the operation to retake Iraq's second-largest city last October.

On Thursday, Commander of Nineveh Liberation Operation Lieutenant General Abdul Amir Yarallah announced that Iraqi forces had fully liberated the al-Surah district in west Mosul, adding that the national flag had been hoisted on top of several buildings there.