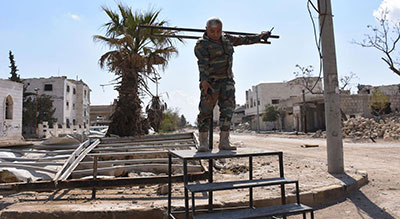 You can't mistake the front line between the Syrian army and Turkey's occupation force east of Aleppo. The Syrians drove Daesh [ISIS/ISIL] out just a month ago and Russian troops are now present on both sides of the T-junction which marks the line between the two Middle Eastern armies in Tader and al-Bab. But there's no mistaking the makers of the obscene iron scaffold which brought both armies crashing across this bleak, smashed countryside: a crucifixion cross left standing for its next victim when the Syrians arrived in Tader. 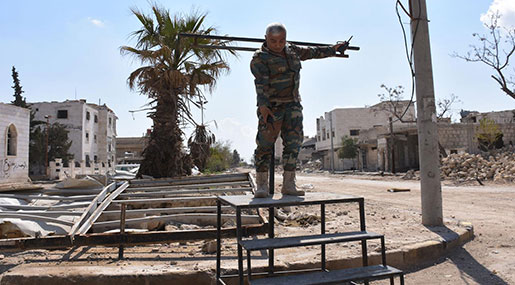 There's even the remains of a screen on which Daesh would replay DVDs of previous executions in case the villagers had forgotten whom their masters were. For two years, Daesh ruled this broken countryside. Men who smoked or whose wives did not conform to their niqab dress code, were forced to dig the military trenches and tunnels which vein the rich fields between Tader and the old Aleppo-Raqqa motorway to the south. Those guilty of more heinous crimes were taken to the revolting implement at the T-junction.

It's an iron platform with a steel backbone from which two broad arms of twin metal strips stretch out on each side for the victim's arms. The iron tie-holds for the arm ropes are still there. So are the three steps which lead up to this fearful site of perdition. They are wide, these three steps, as they might have to be for a swooning man facing more than just execution. For he was also, once his arms were tied to those iron bars, decapitated; and his head - according to the local Syrian major now commanding the soldiers opposite Turkey's army - placed at the feet of the corpse.

"We found three Isis [Daesh] bodies in the shop over there," he says. "And plenty of Isis [Daesh] documents which we sent to our intelligence services. This is the ‘disputed' zone and the Turks are down there." And the colonel walked briskly across the rubble and pointed down the left road on the T-junction and, perhaps no more than 500 meters away, we could see the Turkish flag above a stone barricade. On my map, we were at least 23 miles inside Syrian sovereign territory and the Turkish army also occupies the big cereal storage to the south-west.

The Russians know all this, too, of course, because their military police and soldiers are on both sides of the new line, a Moscow version of all those UN "peace" lines which flower and die across the Middle East at regular intervals. Their soldiers carry a Russian blue, white and red flash on the sleeve of their combat jackets; they are smartly uniformed, wear red berets, and can be seen taking coffee by the roadside with their Syrian opposite numbers. Their armored vehicles, unnumbered and with no registration plates, stand in the roadway, some of them marked "Military Police" in both Russian and Arabic. According to the Syrians, a Russian liaison officer regularly speaks to his colleagues on the other side of the line. There is no contact between the Syrians and the Turks, whom the former identify - not entirely without justification if you travel to Tader - as their enemies.

How come, for example, that the fleeing Daesh men on 26 February appear to have made it to safety in the Turkish-occupied zone? Even more important, how come that the armed members bussed out of the last enclave in Homs on Monday were escorted by the Russians right through Tader and down that bleak road towards the Turkish flag where Turkey allowed them to travel to the Syrian town of Jarablus, which is also inside the Turkish occupation zone? They included, as we know, Nusrah/al-Qaeda and other extremist groups whom - so Turkish President Erdogan would have us believe - are also his enemies.

The story of the latest battles in the Rif Aleppo - the "countryside of Aleppo", east of the now reunited if half-desolate city of the same name - casts an intriguing reflection on the vast Syrian war, not least Turkey's self-appointed role. For anyone in Tader can see with their own eyes that there are no Daesh forces around the Turkish occupation army. What there are is a quite different force: the Kurds, with whom Erdogan wishes to pursue his war and who he hopes to prevent creating their own statelet along the Turkish frontier further north.

But back to the battles. After the fall of eastern Aleppo and the dispersal of its 90-95,000 civilians - the old figures of 250,000 and 150,000 now appear totally discredited - to the west of the city and to Idlib, the Syrian army continued its advance into the eastern countryside. Its first objective was to seize the water filtration and pumping plants from Daesh, Nusrah and their allies without the armed groups blowing them up and destroying the water supply to Aleppo city. The Syrian commander, General Saleh Abdullah, ordered his tank crews not to fire at the water facilities, which were surrounded with mines planted by the insurgents.

Nusrah and Daesh heard these radio instructions on the Syrian military radio net and, according to the local Syrian commanders, sent their vehicles and men into position close to the water plants for protection. Then the general cut off all radio and mobile phone links in the area, and set up snipers to kill every terrorist they could see. When the Syrian army did attack, they successfully prevented the destruction of the facilities but came under ferocious attack from Daesh suicide bombers. Syrian officers are unwilling to go into the details of their casualties but it appears that every soldier who confronted the suiciders - one driving ten tons of explosives in a captured BMP armored vehicle - was torn to pieces in the subsequent explosions. One Syrian officer spoke disconcertingly to me of "an umbrella of blood" under which their victory was achieved.

But now, however, the Turks were preparing to move south of al-Bab. Gen Saleh Abdullah, who himself lost most of his left leg in a Daesh IED explosion more than a year ago, suspected the Turks wanted to reach the motorway between Aleppo and Daesh's Syrian "capital" of Raqqa - thereby preventing the Syrian army itself from moving towards Raqqa. So the Syrian soldiers under his command bashed on northwards through the Daesh-held villages and towards the Turkish army's front line at al-Bab.

The Turks did not move. But the wreckage of Daesh resistance now litters the broken road twenty miles up to Tader; abandoned home-made mortars, a Russian-made BMP in Daesh camouflage paint - it even carries a Daesh military number plate, "18" printed on black [of course] - and miles of trenches and tunnels. Far more shocking are the villages through which I passed; Albreij, Ein Dahab, the hill of Tel Serba [where, by chance, the general lost his leg many months earlier], Aran and Albireh and Abu Taltal. Not a house, not an animal stable, not a fence remains standing. All have been shelled to bits. Trees have been split in half. Even the vines have been slashed down by shellfire.

In fact, it was only when I reached Tader that I realized I had travelled from the east of Aleppo city to the front-line village - all of 40 miles - without seeing a single intact house, apartment block or factory. Only the old power station north of the salt marshes east of Aleppo appears to be operating. After the ruins of eastern Aleppo city, the countryside looks more like those old postcards of the First World War in which the retreating Germans caused as much damage as the advancing allies. The political parallels don't work. But there's no doubt that Daesh and Nusra performed the old 1918 Reichwehr tactic of blowing up villages behind them as their enemies advanced.

Remarkable, too, was the way in which the largely terrorists had used precisely the same underground tactics in open countryside as they had used beneath the streets of Aleppo and Homs: a vast labyrinth of tunnels which curled their way beneath the earth, their entrances suddenly exposed at small concrete entrances beside the narrow roads, weaving into and out of the wrecked villages. The Land of Tunnels will decay in time. Already a few brave souls have ventured back to the rubble they call home.

As for the Turks, it's difficult to know whom they fear most in their lonely occupation zone. The Syrian army? Possibly. Daesh? Given its close relationship with the military in al-Bab, I suspect not. The Kurds? Most definitely yes.