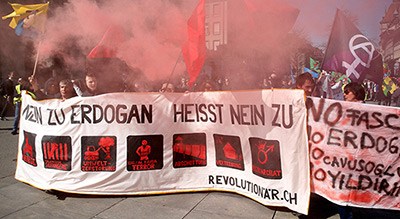 The Turkish Foreign Ministry had summoned the Swiss ambassador to Ankara over a protest in Bern targeting Turkey's president, Recep Tayyip Erdogan. The protest had Kurdish groups among its organizers. 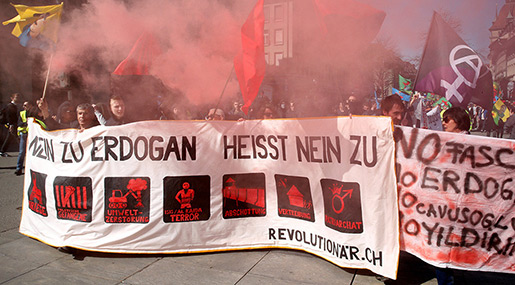 The ambassador, Walter Haffner, was told that Turkey expects the Swiss authorities to bring the organizers of the protest to justice and to prevent such "incidents" in the future.

"We are protesting this rally that explicitly promoted violence and terrorism and has been permitted, and we ask Switzerland to take immediate legal action against this offense," the ministry said in a statement late March 25, as cited by the Turkey's Hurriyet daily.

The demonstration, which was held on Saturday in central Bern, was attended by some 3,000-3,500 people, the Swiss media report, citing the event's organizers. The protesters marched through the city center and then held a rally in front of the federal parliament building.

They were chanting anti-Erdogan slogans and were holding numerous placards that read, "For Democracy in Turkey." They also expressed their opposition to the constitutional changes advocated by Erdogan ahead of the April referendum.

The Turkish authorities insist that the rally held in front of the Swiss Federal Parliament building in the city Bern was organized by the members of the outlawed Kurdistan Workers' Party [PKK] and Revolutionary People's Liberation Party/Front [DHKP-C].

According to the Swiss media, the rally was organized and supported by more than 30 various organizations, including the Swiss Social Democratic Party and the Green Party, as well as some Kurdish groups.

Some demonstrators were indeed holding the PPK flags as well as flags and placards featuring the jailed leader of the PKK, Abdullah Ocalan.

A particularly angry reaction from Turkish officials was provoked by a placard featuring Erdogan with a gun pointed at his head and the slogan, "Kill Erdogan with his own weapons." It was held by members of a leftist autonomous NGO called the Revolutionary Youth Group, which describes itself as an "anti-capitalist and anti-authoritarian" group.

Erdogan himself specifically addressed this issue during a rally in Istanbul on Sunday, Reuters reports.

"Switzerland took it a step further. Their leftist parties and the terrorists ... have come together and carried out a march. In the Swiss parliament, they hang my picture with a gun to my head. The Swiss parliament remains silent in the face of this," he said, referring to a war of words that broke out between Turkey and some European countries that banned Turkish officials from holding rallies on their territory in support of the Turkish constitutional changes ahead of the referendum scheduled on April 16.

The rally was attended by some members of the Swiss Social Democratic Party and the Green Party as well as by the head of the Swiss Association of Trade Unions, Paul Rechsteiner. A Turkish MP from the opposition Peoples' Democratic Party [HDP], Feleknas Uca, delivered a speech at the gathering, according to Hurriyet.

The Turkish referendum in April will propose amendments to the constitution that will make Erdogan the sole executive head of state, with the authority to choose his own cabinet ministers, enact laws, call elections, and declare states of emergency.

The referendum and particularly Turkish officials' attempts to hold meetings with Turks living in Europe ahead of it have already become a source of tensions between Turkey and some European countries.

Pro-referendum rallies, which were canceled in Germany, Austria and Switzerland, provoked an angry reaction in Turkey, who accused the EU of "selective democracy and xenophobia." Turkey also engaged in a diplomatic row with the Netherlands after the Dutch authorities barred to Turkish ministers from attending pro-Erdogan rallies.