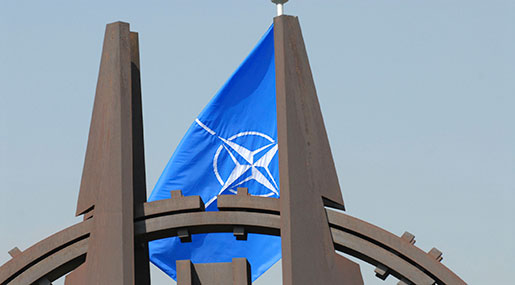 According to Lieberman, member states of the Gulf Cooperation Council [GCC] - led by the Saudis - have realized that the "greatest danger to them is not "Israel", nor Zionism, but Iran".

"The time has come to openly organize a formal union, a coalition of all the moderate forces in the Middle East," Lieberman added, "this coalition needs to be a real commitment. Look at NATO. The basis of the alliance [NATO] lies in the principle that each country is ready both to defend and to accept protection from other countries".

The candid suggestion from the "Israeli" official comes amid reports that the new US administration is talking to Washington's Arab allies about forming a military alliance that would share intelligence with Tel Aviv.

The alliance - with Iran in its crosshairs - would reportedly include GCC members Saudi Arabia and the United Arab Emirates, as well as Egypt and Jordan, which have longstanding peace treaties with "Israel".

Writing for the Wall Street Journal, Maria Abi-Habib claims that the alliance would have a NATO-style, mutual-defense component under which an attack on one member constitutes an attack on all. Abi-Habib cites several anonymous Arab officials, adding that Washington would play a key role, offering both military and intelligence support to the alliance "beyond the kind of limited backing it has been providing to a Saudi-led coalition... in Yemen."

Interestingly, Yemen - where millions are being starved and thousands have been slaughtered in order "to contain Iran" - offers some very disturbing insights into what might be expected from a military alliance comprising Saudi Arabia, the U.S. and the "Israelis".

It's not exactly a secret anymore that the Saudis and the "Israelis" have been bedfellows for decades. Despite not having official diplomatic relations, the two have shared intelligence, cooperating politically and militarily across the Middle East whenever the circumstances demanded.

From jointly undermining Palestinian aspirations for statehood, supporting regional terrorist networks and toppling governments, to the nearly synchronized, anti-Iranian statements at international forums - such as last month's Munich Security Conference - the Saudi-"Israel" alliance has come to embody an enduring regional one.

Saudi dissident and director of the Institute for Gulf Affairs, Ali Al Ahmad, believes that the time has come to "formalize" this alliance.

"Saudi/Gulf cooperation with "Israel" has been a long-standing policy and they want to formalize it. Because, to be frank, the potential Arab/Muslim reaction to it has been overstated for generations. I don't think that Gulf and other Arab public opinions will generate that backlash that was feared from the Arab street for a long time," Al Ahmad opined.

From a geopolitical standpoint, expanding this alliance makes sense, as efforts to subvert Tehran and the whole of the resistance axis are becoming increasingly desperate. Thus, in the eyes of the Saudi monarchy, reputations and a few oppressed Palestinians may have to take a backseat to geopolitical aspirations.

These were reportedly some of the issues discussed by senior "Israeli" and Saudi intelligence officials in late February.

Khalid bin Ali bin Abdullah al-Humaidan is said to have discussed a broad range of issues with his "Israeli" counterparts, including the idea of a US-"Israeli"-Arab regional conference, hatched by Donald Trump and Benjamin Netanyahu during the latter's trip to Washington.

Also on the agenda are Iranian military capabilities displayed during the country's recent war games, as well as a warning to Mahmoud Abbas to not get too cozy with Tehran following reports of secret talks in Brussels between officials from Iran and the Palestinian Authority.

Al-Humaidan's trip, which also coincided with the Sixth International Conference in Support of the Palestinian Intifada hosted by Iran, suggests that Washington, Tel Aviv and Riyadh may be looking to take the issue of Palestine out of the equation. They aim to do so by inking some form of a peace agreement with Ramallah, while sidestepping Tehran and the region's resistance movements.

Iran is not sitting with its arms crossed

The very idea of a formal alliance in the Middle East along the lines of NATO involving the US-"Israel"-Saudi axis is a recipe for ramping up regional conflicts - especially given the fact that its stated purpose is ‘containing Iran'. Such a formation will certainly be seen as a major provocation by Tehran.
"If such plans were implemented, they would be detrimental to international and regional security. There is no reason for... [a] bloc against Iran... Iran does not threaten anyone," said Russian military expert Igor Korotchenko.
Naturally, the Iranians are not standing idly by. As the country's Foreign Minister Mohammed Javad Zarif pointed out following the latest round of U.S. sanctions against Iran, "we don't respond well to coercion".

"We are prepared to confront whatever threat is posed to the Islamic Republic's establishment," said the IRGC commander, Brig. Gen. Ali Akbar Pourjamshidian upon the conclusion of the drills.

More importantly, perhaps, Tehran is also firming up its alliances.

According to Fox News, the commander of Iran's Quds Force, Qassem Soleimani visited Moscow in mid-February to discuss a number of pressing regional issues, including the Kremlin's position on Saudi Arabia.

Following their success in Syria, both Tehran and Moscow are looking to broaden their cooperation to include the entire Middle East. And the expected trip to Moscow by Iranian President Hassan Rouhani this month is doubtless intended to further strengthen the foundations of Iran's ties with Russia.