French police searched the home of presidential candidate François Fillon as part of an ongoing investigation into an allegedly fictitious Parliamentary job given to his wife, local media reports. 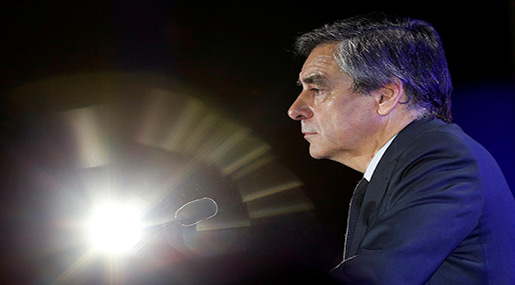 The raid was conducted on Thursday morning in Paris however authorities have not commented on the search, according to Le Parisien.

Fillon had consistently denied that he employed Penelope Fillon in a fictitious capacity, and had backtracked from a previous pledge that he would stand down in the event of an official probe being launched.

He confirmed he would be summoned for questioning over "Penelopegate" on 15 March, claiming the investigation process had been unfair and amounted to a "political assassination".

"I will answer the summons, I will respect the judges...although what we have seen is not natural," Fillon said.

"I will not cede, I will not give up, I will not withdraw, I will continue to the end because it is democracy that is under attack."

The paper found Fillon was paid €831,400 [£710,000; $900,000] over several years for her work as parliamentary assistant to Fillon despite having no parliamentary pass or email address.

Fillon remained adamant his wife conducted genuine work, though he has acknowledged her employment was an error of judgement.

The former Prime Minister, who is running for the center-right Républicains, battled down a rebellion by members of his party last month and insisted his withdrawal from the race would destabilize their campaign.

Opinion polls currently put him lagging in third place for the first round of the French election, behind Front National leader Marine Le Pen and center-left independent candidate Emmanuel Macron.