"Donald Trump would love to get along with Moscow, but due to "false, horrible and fake" news reporting, Americans would likely see it as weakness and would rather praise as "great" an order to sink a Russian ship," the US president said. 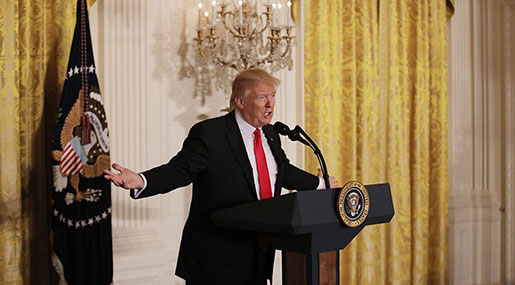 "Tomorrow you'll say: ‘Donald Trump wants to get along with Russia. This is terrible!' It's not terrible. It's good," Trump said during his 90-minute press conference on Thursday in which he mounted a vigorous offense against "fake news" and its impact on Russian-US relations.

"I know politically [getting along with Russia] is not very good for me... The greatest thing I could do is shoot that ship that's 30 miles off shore right out of the water. Everyone in this country is going to say ‘Oh, that's so great!' That's not great... I would love to get along with Russia."

Trump was referring to the presence of a Russian naval ship, the Viktor Leonov, in international waters off the East Coast of the United States, which has made the US media apprehensive in recent days.

Trump urged US media not to obstruct the potential rapprochement between the world's two biggest nuclear powers with "fabricated" news about his alleged ties to the Kremlin.

"I want to just tell you, the false reporting by the media, by you people, the false, horrible, fake reporting makes it much harder to make a deal with Russia," Trump said. "And probably Putin said: ‘...It's going to be impossible for President Trump to ever get along with Russia because of all the pressure he's got with this fake story.' Okay? And that's a shame."

Trump firmly rejected speculation that Vladimir Putin was "testing" him, as voiced by one of the reporters, saying that "Putin probably assumes that he can't make a deal with me anymore because politically it's unpopular for a politician to make a deal."

Trump also noted that he wants to "do the right" thing for the American people and try to make a deal with the Kremlin. But being "tough" on Russia will not make that deal happen, he assured the reporters.