The resistance got over the major loss of the assassination of its Jihadi leader Hajj Imad Mughniyah nine years ago. A great amount of credit for getting over this loss goes back to Imad Mughniyah himself and to the team that was working with him. 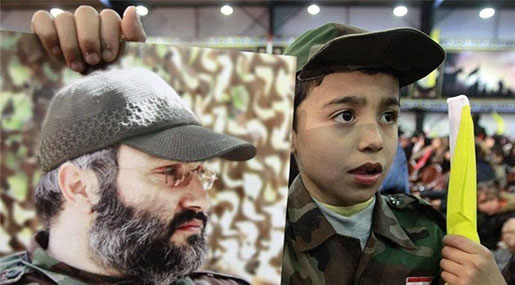 Before his martyrdom, al-Hajj Radwan [Imad Mughniyah] had done the bulk of the tasks entrusted to him including orchestrating the growing strength of the resistance and transforming it from a local organization to a regional power capable of fighting two battles at the same time. The man who managed, brilliantly, to harmonize between security work and military work, as well as transfer the experience of the resistance in Lebanon to Iraq and Palestine, would have -without a doubt- raised the hat to those who shared his duties and to his fighters who have accumulated a lot of experiences after his martyrdom, as their "share" in the political and military calculations in the region became enormous. And much of what the resistance fighters accomplished in recent years is based on the legacy of Imad Mughniyah. Most importantly, the accumulation of the deterrent force that makes the "era of Imad Mughniyah" live on until today.

It took place on the day of Imad Mughniyah's assassination on February 12, 2008. Some resistance leaders, from senior and secondary ranks, opened their work "mail" to find messages from "al-Hajj". They received the responses to plans and projects, which they have already discussed with him and sent him drafts of. Some projects and plans were approved while others were rejected. These messages seemed almost like his will. It was not known whether al-Hajj Imad had a videotaped will like the other martyrs of the resistance.

But for sure "his practical will" was implemented before his martyrdom. In practice and without exaggeration, we in Lebanon and part of the region are still living the "era of Imad Mughniyah". He did not work alone. He was part of an organization in which he was keen to (and contributed to) erecting its building blocks brick by brick, since thaking on a leadership role in the military and security arms of the resistance in Lebanon in 1998. Putting Sayyed Hassan Nasrallah aside, Mughniyah was the first among equals in the Jihadi leadership of Hizbullah.

Someone who was close to him said that whenever martyr Mustafa Badr al-Din entered a room, he [Mughniyah] stood up saying: "Welcome, our great one". He never said it as a compliment. He saw his comrades in the leadership of the resistance as equal colleagues to him. He appreciated some of them and even believed that he was not the best one of them. But at the same time, those who knew him assert that he had a magic touch. He was intelligent and possessed unlimited leadership capabilities. More importantly, he had the courage to say yes and no, and make plans that achievements are built on.

Why the "era of Imad Mughniyah"?

The resistance has gone through several stages. After the year 2000, it had to adapt to a new reality. After the "guerilla" war against the occupation forces, the resistance sought to achieve two projects. The first was to build a defensive force to address any future aggression and prevent it from occupying the land. And here lies the excellence achieved by the resistance led by Mughniyah. Resistance movements begin their work after the occupation of the land, not before and without facing the armies in the classical sense. As for Mughniyah, he wanted something else. He used to simplify things to people that he addressed.

"Have you seen Tom and Jerry? Did you see how it used to enter from one place and come out from somewhere else, without his enemy being able to catch him? I want a network of tunnels that would achieve such an outcome," he would say.

He got what he wanted. Above the infrastructure, he worked on the human element and linked it to the land of the south, which would be the field of direct contact with the enemy in the future. The resistance limited its training camps to the Bekaa (apart from Syria and Iran). Suddenly, the land of the south become a field for training. In this field, the party's special forces were built. Any full-time employee in any arm of the resistance had to undergo a harsh and strenuous training program on the land of the south. Al-Hajj wanted to make the fighters more familiar with the battlefield and able to work and maneuver on it.

The second project, which Hizbullah worked on accomplishing it under the supervision of Mughniyah after 2000, was building a force to deter the enemy from launching any aggression against Lebanon, taking into account that the resistance will continue to carry out its operations, both in the Shebaa Farms, or to liberate the prisoners. In this particular field, Mughniyah was the "master". He was one of the most prominent figures who forced the enemy to commit to the rules of the game with the resistance and limit the military and security work in the way that it was revealed in the April 1996 agreement: Do not bombard our civilians, so we do not bomb your settlements. Based on the "invisible security force" that Hizbullah has not disclosed yet, and is not expected to disclose in the future (refusing to recognize it), Mughniyah forced the enemy to lower its work quota against the resistance and its environment.

You assassinate Sayyed Abbas al-Musawi (February 16, 1992), the response comes to the ends of the earth. You target a force of the resistance in a training camp in the Ain Kawkab in the Bekaa (1994), the "invisible force" comes out once again away from the rules of the game and hits the enemy "where it counted".

The genius here was in the rapid preparation and implementation. As if there was a force ready with plans and goals. It only needed an order to be activated. Herein lies the equation of deterrence: building a force the enemy fears. But it does not frighten it for its mere existence. Instead, what makes it feared is the will of its activation.

Although al-Hajj Radwan was fully aware of the limits of the strength of the resistance, but he also knew at the same time that Hizbullah was able, as an unsystematic popular movement with limited resources, to go beyond the potential barriers. In proposing any capacity-building projects, he never considered the psychological barrier, which says that "this project needs a state to be constructed and managed". Building a sea missile, for example, or for the resistance to possess an air force. "What do we lack? Engineers? Young innovators? Search for them. You will find them," he would say.

And so it was. "We need accurate missiles, long-range (relative to the area of Lebanon and occupied Palestine). Let there be factories in Syria (and Lebanon)," Imad Mughniyah asserted.

In this particular area, his role is highlighted as an angel in a triangle that joined him with the commander of the Quds Force, Hajj Qasem Soleimani and the special adviser to Syrian President Bashar al-Assad, the martyred general Muhammad Suleiman.

Practically speaking, the enemy had bad luck because it was not able to assassinate Imad Mughniyah directly after the liberation of the south.

The man headed those who decided to expand the resistance and build its system, which prevented ‘Israel' from achieving victory in 2006. The enemy even had worst luck because it could not get to al-Hajj during that war.

Staying alive a year and a half after the end of the aggression enabled him to supervise the process of drawing lessons from the war, identify the gaps, develop plans to fill them, note areas of strengths and seek to strengthen them further. Soon afterwards, the milestone of the next phase was set: the preparation to transform Hizbullah into a "regional superpower" fighting on two fronts at the same time, which ran in accordance with the announcement of the Secretary General of Hizbullah Sayed Hassan Nasrallah in 2008. What Nasrallah also said is that al-Hajj had gone and did not leave a great deal behind that needed completion.

Today we hear the resistance fighters affirm that the bulk of the growing strength of Hizbullah stems from plans al-Hajj Imad Mughniyah hatched, supervised, contributed to, or approved. In short, the deterrence equation, with its two elements (power setting and will to activate), owes its existence to a group of people, the first of whom was Imad Mughniyah. Hence, the scale of the loss suffered by the resistance nine years ago is highlighted. People living in contact with the resistance movement undoubtedly felt his strong presence, even if they never saw him. Just as those who knew him feel the impact of his absence, despite the fact that "the era of Imad Mughniyah" is not over yet.