The changing geopolitical realities both internationally and across the Middle East have pitted the remaining militant factions in Syria against each other. 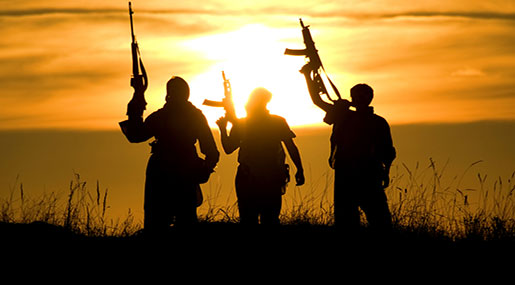 Essentially, the unfolding battle is between the Turkish-backed groups, and the Saudi-backed Jabhat Fateh al-Sham.

The head of the Center for Middle East Studies at the University of Oklahoma, Joshua Landis, believes that "this is really because of the fall of Aleppo and Turkey's 180-degree turn away from the rebels and toward the Russians."

Although these formations were virtually inseparable throughout much of the Syrian war, joining forces on countless occasions across the country's frontlines, Ankara's recent rapprochement with the Kremlin has changed all that.

The previously rosy relationship deteriorated even further when the Turks officially committed to the separation of the so-called moderate rebels from the terrorists.

On January 26, just days after the first round of the intra-Syrian peace talks wrapped up in Kazakhstan's capital Astana, Reuters cited a Turkish foreign ministry source, reaffirming that Ankara designates both Daesh and Jabhat Fateh al-Sham [formally Jabhat al-Nusra], as terrorist groups and acts in line with that policy.

Just hours earlier, Jordan's King Abdullah II met with Russian President Vladimir Putin in Moscow, where he not only praised the Syria peace talks in Astana but also Moscow's "crucial role" in resolving the Syrian conflict and "many other regional issues".

Meanwhile, Jordan's state security infrastructure, which played a central role in destabilizing Syria, has significantly scaled back its support for militant groups.

According to the Lebanese Al-Akhbar newspaper, the Amman-based Military Operations Center [MOC] - the nerve center of armed factions operating in southern Syria - ordered a number of militant groups to stop attacking the Syrian army, and focus instead on Jabhat Fateh al-Sham.

During a January 8 meeting in Amman, Jordanian, US and British intelligence officials reportedly told militant commanders to "stop operations against the Syrian army and avoid periphery battles".

These revelations have led to speculation that Amman may soon become part of a trilateral mechanism involving Russia, Iran and Turkey, set up to monitor the ceasefire regime in Syria.

This as the new US President Donald Trump, who reportedly urged King Abdullah to take on a more proactive role in the fight against Daesh, threw out his predecessor's blueprint for Syria.

The Washington Post reported earlier this month that Barack Obama's detailed roadmap for capturing the Daesh-stronghold of Raqqa was dismissed by the Trump administration.

The plan proposed training Kurdish forces, providing them with new equipment, and helping them push Daesh militants out of Raqqa.

But Trump was apparently unhappy with the plan's lack of a strategy to cooperate with Russia, as well as its failure to address Turkey's concerns over US-support for the Kurds.

"Trump indicated to Turkey and everybody else; ‘we are going to side with Assad and the Russians, not with the rebels'," says Joshua Landis.

According to unconfirmed reports, the Syrian army is gearing up to launch an offensive against some of the last remaining militant strongholds in the country's northwestern province of Idlib by spring of this year.

The growing anxiety among the increasingly squeezed militant factions over the Syrian army advances, coupled with Ankara's decision to team up with the Russians and the Iranians, gave way to fierce fighting across Idlib.

Ahrar al-Sham, which is now firmly under Ankara's control and the Saudi-backed Jabhat Fateh al-Sham are increasingly at odds especially over the control of the official crossings between Syria and Turkey, as well as the many smuggling routes along the border.

These are vital for the survival of all militant formations, as almost all of the material, technical and logistical support comes from Turkish soil. Thus groups backed by Ankara may already have the upper hand since Riyadh can do little more than offer financial assistance at this point.

"Many of the rebel groups realize that Assad is winning; their supporters are turning against them. They have to begin to get into talks and follow Turkey's lead... some of them will flee into Turkey and find a refuge there. Others will accept Assad's surrender terms essentially, and be folded back into society. But Nusra and some of the more radical groups are branded as terrorists by the international community. They don't have a choice... they are trying to consolidate their position and increase their bargaining power both with the regime, with the Turks and with everybody else," Landis opined.

Shortly after the peace talks in Astana kicked-off Nusra announced the formation of a new alliance involving the Nour al-Din al-Zenki Movement - a group previously supported by the US and classified as a moderate rebel organization.

Other formations in this new alliance include Liwa al-Haqq, Jaysh al-Sunna and Jabhat Ansar al-Din. This new merger gave birth to Tahrir al-Sham, marking Al Qaeda's third attempt to rebrand itself in Syria.

The terrorist groups initially declared the formation of its Syria wing - dubbed Jabhat al Nusra - at the start of the Syrian conflict. In a desperate attempt to present a new face to the world, the group was renamed Jabhat Fateh al-Sham in the spring of last year.

Aside from trying to distance itself from the atrocities committed against the Syrian people, the latest rebranding of al-Qaeda also highlights the imminent defeat facing the political and military agendas of the Gulf monarchies in Syria.

With such thinly veiled, desperate moves employed by the conflict's main instigators that have plagued the Syrian Arab Republic, one can finally begin to entertain a discussion that involves the possibility of a conclusion to the tragedy that has endured for more than half a decade.