Little children should not be drawing missiles and corpses. When I met Yemeni girls and boys in a sandy, sun-scorched refugee camp in the horn of Africa, the pictures they had drawn chilled me. One depicted airplanes raining missiles down on houses; there were frowning corpses in crudely drawn puddles of blood, a weeping child beside them. These were horrors they had suffered - and they suffered them, in part, because of the role of Britain's government. 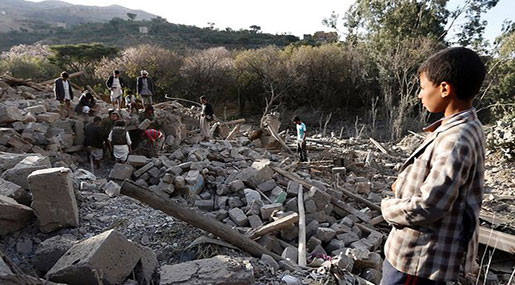 Yemen is in the midst of a civil war that has lasted two years, taken the lives of 10,000 civilians and plunged the country into a humanitarian crisis. There are multiple parties involved, all unsavory, all accused of war crimes. But, as the UN reported last year, it is a military coalition led by Saudi Arabia that is responsible for the vast majority of civilian deaths. Some of those civilians are being killed by British-made bombs, sold to the Saudi dictatorship by our government. Since the Saudis began pummeling Yemen, the government has granted licenses for £3.3bn worth of arms. It is a cause for national shame.

The government cannot plead ignorance. When I met Alan Duncan, the Tory special envoy on Yemen, last April, he denied that Saudi Arabia was a dictatorship. When I put it to him that the Saudi regime was dropping British-made cluster bombs - for which there was overwhelming evidence - he refused to accept it. "You are making that statement as if it is certain and definite," he said. "I don't know if I can or cannot accept that." A few months later, the defense secretary, Michael Fallon, was forced to admit in parliament that it was true.

"It is clearly the view of the government at the moment that our weapons have not been used in breach of international humanitarian law," Duncan told me. And yet we now know that, just two months earlier, Edward Bell, the senior civil servant with responsibility for export control, recommended suspending arms sales over human rights abuses. The then-business secretary Sajid Javid refused.

That's why the case currently in the high court against the government - brought by the Campaign Against the Arms Trade [CAAT] - is so critical. CAAT argues - just as the senior civil servant ignored by the government argued - that arms sales to Saudi Arabia must cease. As parliament's international development and business, innovation and skills committee put it in October: "Given the evidence we have heard and the volume of UK-manufactured arms exported to Saudi Arabia, it seems inevitable that any violations of international humanitarian and human rights law by the coalition have involved arms supplied from the UK. This constitutes a breach of our own export licensing criteria."

Ministers must not be allowed to discreetly wash their hands of Yemeni blood. A UN panel of experts last year said that violations in Yemen were "widespread and systematic". Entire cities - such as Sa'dah - had been classed as military targets.

"The UK government rules are very clear," CAAT's Tom Barns told me. "Licenses for UK arms will not be granted if there's a clear risk they'll be commissioned in a serious violation of international humanitarian law." British weapons "are playing a central role in this bombardment", he added.

Consider some of the horrors being unleashed with Britain's military and diplomatic support.

Last October, our Saudi allies killed at least 140 civilians when they bombed a funeral. In August, 10 children were killed by a Saudi airstrike on their school. Only last month, yet another school was hit by a fatal airstrike. No wonder Oxfam has labelled Britain's weapons sales a serious violation of humanitarian law.

This isn't just about Yemen: it's about the very nature of western foreign policy. A recent poll found that nearly two-thirds of Brits oppose arms sales to Saudi Arabia; just over one in 10 are in support - and no wonder. Saudi Arabia is Britain's biggest arms client. It helped crush protests for democracy in neighboring Bahrain in 2011: both regimes are lucrative customers for our arms.

Meanwhile, Yemen was one of the Muslim-majority countries targeted by Donald Trump's travel ban. It's a country where civilians are driven from their homes because of US- and British-backed violence, then have their pleas for refuge denied, partly on the basis that they may be terrorists. What is the onslaught from Yemen's skies if not state terrorism?

While the high court considers the legality of arms sales, the moral case is inarguable.

Thousands of Yemeni civilians are being murdered, and our government shares responsibility.

Yemen may seem like a far-away country, whose internal situation is too complicated to understand, and don't we have enough to worry about here? But our silence risks being complicity. Our government is acting in our name. Yemeni civilians are cowering for their lives, partly because of decisions made by No 10. Don't let them get away with it.

And then there's Turkey, which is swiftly degenerating into a dictatorship, repressing opposition and inflicting serious human rights abuses against the country's Kurdish minority. Our prime minister has rewarded President Erdogan's despotic regime by signing a £100m fighter jet deal.