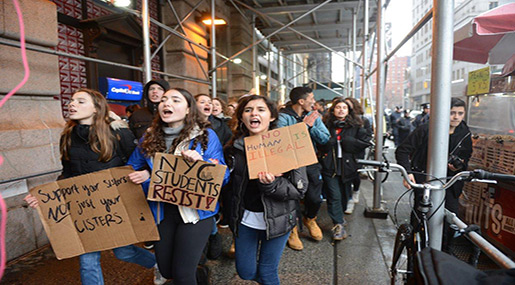 At a rally at Manhattan's Foley Square, protesters decried the immigration ban as well as the confirmation of Betsy DeVos Tuesday as the country's next education secretary.

DeVos, a billionaire from the state of Michigan, had faced vociferous opposition from lawmakers for having little experience with public schools and advocating the use of tax dollars to finance private Christian schools.

"Betsy DeVos was confirmed today despite her shameful inexperience and complete lack of understanding for the very job she seeks," one student at the rally said.

"Never in my 17 young years have I felt as black as I did the day Trump became our President. Never in those 17 years have I felt as much Islamophobia, discrimination and hate as I did in the last three months," said Yacine Fall, a high school senior from Harlem. "After I cried, I felt more determined than ever not to be silent."

Youssef Abdelzaher, 17, a high school senior from Astoria, Queens, said it would fall to young people to resist the Trump administration.

After the rally, the group marched to Federal Plaza where the New York office of US Citizenship and Immigration Services is located.

Trump signed an executive order on January 27 that imposed a temporary travel ban on citizens from Iran, Iraq, Libya, Somalia, Sudan, Syria and Yemen and placed an indefinite ban on Syrian refugees. The move also suspended admission of all refugees for 120 days.

Last week, US District Judge James Robart, a federal judge in Seattle, Washington, granted a temporary restraining order against Trump's travel ban. The fate of the order is being decided in courts in a legal battle that could end up in the Supreme Court.

"Even though there was a temporary halt on the Muslim ban," protest organizers wrote on Facebook, "We must remain vigilant. Focus on the next issue. Focus on the injustice that went unnoticed."