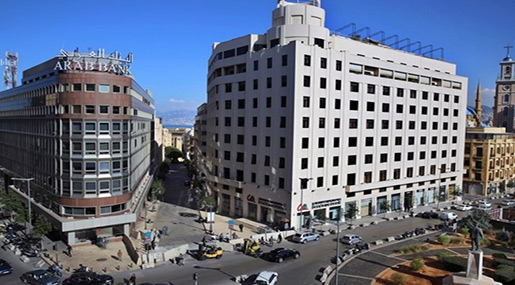 The report, published in Al-Akhbar newspaper, said that Daesh managed to recruit an employee at Solidere, whose job was to monitor surveillance cameras in the downtown area of the capital.

The employee, a Lebanese from the southern city of Sidon, wasn't identified in the report, which only mentions his family name's initial, S.

Daesh allegedly tasked the recruit with collecting information on the convoys of prominent political figures, including Prime Minister Saad Hariri, businesses and touristic sites in the area.

Judicial sources told the daily that the General Security arrested the suspect on Jan. 10.

The suspect allegedly confessed that he had been recruited by a Palestinian in the southern Palestinian refugee camp of Ain al-Hilweh to collect information on possible targets in downtown Beirut.

The Palestinian was also arrested and reportedly admitted to working at the behest of a Daesh leader residing in Ain al-Hilweh to recruit Lebanese youth to join the ranks of the extremist group.

He told investigators that the recruited youth were smuggled into the Daesh-occupied of Raqqa in Syria.

The suspect added that the Solidere employee was chosen due to the nature of his job, which allows him to oversee "sensitive information."

Al-Akhbar said that the directorate wrapped up its investigations more than 10 days ago and is seeking to maintain an air of secrecy.

It added, however, that when the case reached the judiciary, part of the information was exposed.

The report goes on to say that General Security chief Abbas Ibrahim briefed PM Hariri on the case.

Interior Minister Nouhad Machnouk confirmed the report to the daily, saying that the "General Security conducted a pre-emptive strike, thwarting a terror act," noting that the detainees were referred to the Military Tribunal more than 10 days ago.

Lebanese security forces had been cracking down on militants as part of pre-emptive operations against extremist sleeper-cells.

The military also recently busted an extremist cell planning to conduct a mass attack in Lebanon during the holiday season. The network had links to Jabhat Fatah al-Sham - formerly the al-Qaeda-linked Nusra Front - and extremist Shadi Mawlawi.

Mawlawi is believed to be hiding in the south Lebanon Ain al-Hilweh Palestinian refugee camp after fleeing the northern city of Tripoli following an army crackdown on extremist militants in 2014.