In a landmark judicial review case on 7, 8 and 10 February, the UK High Court will determine the legality of the UK government's arms transfers to Saudi Arabia amid the current armed conflict in Yemen. 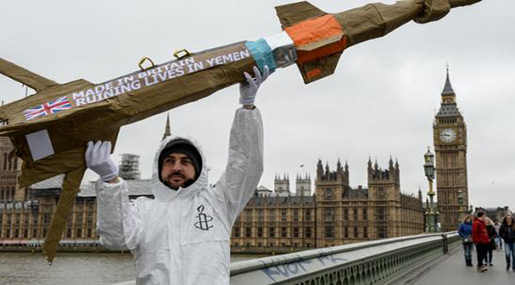 Amnesty International [AI], Human Rights Watch [HRW], Rights Watch [UK] and Oxfam will make submissions to the court, in a legal challenge brought by Campaign against the Arms Trade.

AI's Head of Arms Control and Human Rights James Lynch said: "It is a sad state of affairs that NGOs have to go to court in an effort to force the UK government to do the right thing for the people of Yemen."

"How many civilians need to be killed, maimed, rendered homeless, and have their hopes and dreams shattered by Saudi Arabia-led forces that the UK government, among others, continues to recklessly arm?" he continued.

UK domestic law, the global Arms Trade Treaty [to which the UK is a state party], and rules of customary international law require the UK to ensure that its arms transfers do not aid the commission of war crimes by Saudi Arabia.

Amnesty supporters are currently contacting their MPs urging them to call on the UK government to halt arms transfers to the Saudi-led coalition where there is a clear risk of such arms being used in breaches of international humanitarian law in Yemen.