UK Prime Minister Theresa May is travelling to Turkey for talks with President Recep Tayyip Erdogan about security and a post-Brexit trade deal. 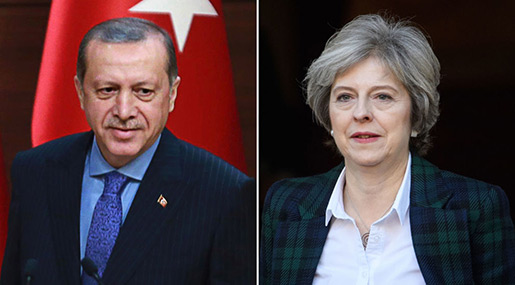 She will unveil fledgling trade discussions with Turkey as she arrives in the country for her first visit.

The Prime Minister's visit to Ankara comes at an unstable time for Turkey, which had suffered several terror attacks in recent months.

May will also be under pressure to confront Erdogan over human rights, as his crackdown on dissent following last summer's failed coup has seen thousands of officials jailed and several media outlets closed.

The UK and Turkey had agreed to set up a joint working group to pave the way for a free trade agreement, but formal negotiations cannot commence until Brexit is finalized.

Amnesty International said that the human rights situation across Turkey had "deteriorated markedly" during the state of emergency imposed by Erdogan - with the charity urging May to ask "probing questions" about allegations that those in detention have suffered ill treatment.

Downing Street had not confirmed whether human rights will be raised during the discussions, but a spokesperson said: "We have already expressed our strong support for Turkey's democracy and institutions following the coup - but we have also been clear that we urge Turkey to ensure their response is proportionate, justified and in line with international human rights obligations."

Turkey is going to become the 13th country to set up a working group on trade with the UK.

Figures from the International Monetary Fund show the UK was the second-largest destination for Turkish exports in 2015, buying more than £8bn in goods.

The Prime Minister and Erdogan are also expected to unveil a strategic security partnership which will see the UK and Turkey collaborate more closely on aviation security and counter-terrorism measures.