Would you like to know how the United States can virtually eliminate global terrorism and world hunger with one stroke? 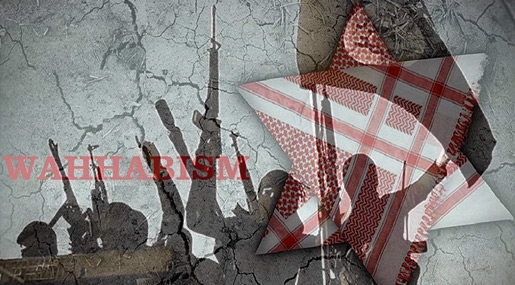 If this sounds preposterous and unethical - "the US doesn't go on the offensive, and it certainly doesn't ‘steal' other peoples' natural resources, especially its allies!" - consider some facts:

First, anyone who sees "ISIS" as a cancer on earth that needs to be eradicated - and most Americans, including President Donald Trump, do - must also see Saudi Arabia in similar terms. For the desert kingdom enforces the same kind of religion "ISIS" does - with all the religious intolerance, beheadings, crucifixions, mutilations and misogyny we associate with the terrorists.

Worse, Saudi Arabia spends a whopping $100 billion annually - trillions over the decades - to support and disseminate ... Wahhabism/Salafism around the world. Virtually all radical literature, radical mosques, radical websites and radical satellite programs - all of which create radicals - are funded by the Saudis. In other words, if you trace the "radicalization" of Muslims - including formerly good neighbors and colleagues that suddenly got pious, grew a beard or donned a veil, and then went on a shooting spree, or "martyred" themselves in a suicide attack - Saudi money will almost always be at the end of the line.

It gets worse still: The "Islamic" kingdom is not only the chief exporter of radical ideologies; it is also the chief financier and material supporter of the worst terrorist groups. "ISIS" and al-Qaida would not exist without Saudi and other Gulf largesse.

So how is Saudi Arabia able to fuel this multifaceted and global "jihad"? Entirely from the oil reserves beneath the Arabian Peninsula.

Now, in a fair world, surely the Saudis should keep the natural resources of Arabia - even if it was the West that discovered and created the technology to utilize oil. But when they openly use that wealth to spread hate, turmoil, terrorism and the slaughter of innocents around the world, surely the international community is justified in responding - in this case, by seizing the weapon from out their hands, that is, the oil wells.

Some may argue that, whatever the merits of this argument, there's no way US leadership could sell such a war to the American people. Actually, they could - very easily; and all they would have to do is tell the American people the truth for a change.

Remember, the establishment has already behaved more "spectacularly," including by going on the offensive against several Arab rulers - in Iraq, Libya and now Syria. In every case, the real motives for war were/are hidden from the public, probably because they didn't and don't serve American interests [hence why "ISIS" is now entrenched in "liberated" Iraq, "liberated" Libya and still being "liberated" Syria]. All US leadership and media had to do was portray Saddam, Gadhafi and Assad as "monsters" persecuting their own people. That was enough for most Americans to acquiesce to the waging of these wars if not heartily support them.

In the case of Saudi Arabia, the establishment wouldn't have to deceive the public: The Saudi regime is a monster. As in "ISIS"-held territories, women in Saudi Arabia are little better than chattel; blasphemers, apostates ... are persecuted and sometimes executed; all non-Sunnis - from Hindus to Shia - are subhuman "infidels" to be treated accordingly; house churches are closed, Bibles and crucifixes confiscated and destroyed, and Christians caught worshiping in private thrown in jail and tortured. Saudi Arabia is arguably even more backward than "ISIS": Women can still drive in Mosul and Raqqa, whereas they are forbidden in Saudi Arabia; and the Saudi government has its own special department devoted to tracking down and executing witches and warlocks.

Nor is Saudi savagery confined to the Peninsula. The regime once issued a fatwa, or Islamic-sanctioned decree, still available online for all to see, calling on the world's Muslims to hate all non-Muslims [meaning more than 99 percent of Americans; such is how "our good friend and ally" really feels about us].

In short, from a libertarian or humanitarian point of view - and that's the point of view that was used to justify war in Iraq, Libya and Syria to the public - the tyranny of Saddam, Gaddafi and Assad pale in comparison to that of Saudi leadership.

In this context, what is to stop, say, the UN Security Council - America, France, Britain, Russia and China, all nations that have suffered from Saudi-funded radicalization and terrorism - from sending a military coalition to seize and internationalize the oil wells of Arabia? How would that be any different than seizing the assets of a terrorist organization, which the Saudi regime amounts to?

The oil can be shared equally, fair international prices can be established, and, to assuage any Western guilt, revenues - including the 100 billion spent annually sponsoring religious radicalism and terror - can go to the poor and needy of the world, including if not especially the Muslim world. Peninsular Arabs can still be maintained by a rich stipend; they can keep Mecca and Medina and, if they still choose, practice Sharia on one another without being a threat to the civilized world at large.

A win-win for all concerned - the developed world, the underdeveloped world and even Peninsular Arabs content with practicing Islam among themselves. Even the world's Muslims, whom we are told are overwhelmingly moderate, should welcome the liberation of their holy places.

The only ones who lose are those committed to using oil wealth to spread radical ... ideologies and terrorism around the world.

If this proposal still sounds too "unrealistic," remember: We already have precedents of the US behaving more spectacularly. In 2003 the Bush administration accused Saddam Hussein of being behind 9/11, of developing weapons of mass destruction and of committing unprecedented human rights abuses. Because these accusations were false or exaggerated - even the human rights violations were often carried out against "ISIS"-types - most Security Council nations rejected war on Iraq. Even so, the US invaded and conquered Iraq; and the average American was fine with it all.

So what's to stop the US from either going it alone again or in cooperation with all or some Security Council members - perhaps a joint Trump/Putin endeavor - and severing the bloodline of global terrorism? It's not realpolitik, "balance of power" theories, or ethical standards that prevent the US from defanging the head of the "jihadi" snake. If the US could go against international opinion and invade Iraq on a number of false/dubious pretexts, why can't it do the same in Saudi Arabia - a nation that is guilty of supporting and disseminating radicalism and terrorism to ever corner of the globe? Incidentally, unlike Saddam, Saudi leadership - to say nothing of 15 of the 19 terrorists of 9/11 - was actually behind the strikes of September 11, in case Americans are still interested in payback.

So why hasn't this proposal been implemented? Because the Saudis know better than anyone else exactly how vulnerable their terrorist activities make them and long ago bought off top and influential Western politicians, institutions, universities and media - in a word, the establishment. Put differently, Saudi wealth is not just spent on the offensive "jihad" - the spread of radical ideas and groups around the world - but the defensive "jihad" as well. This consists of "donating" billions to key Western elements, who in turn whitewash Saudi Arabia before the American public - you know, our "indispensable ally in the war on terror."

The establishment has another, more subtle job: to condition Americans into believing that the very idea of seizing Saudi oil is as unrealistic and absurd as ... well, as Donald Trump becoming president was once.

But times are changing, and old paradigms are breaking; things once mockingly dismissed by the establishment as "impossible" and "ridiculous" are coming to pass. More to the point, there's a new American government in town, headed by one whose immense wealth immunes him to Saudi bribes - one who promises to drain the swamp. Surely one of the foulest things that will be found stuck around the drain hole and in need of rooting out is the unholy alliance between Saudi Arabia and the establishment.