As if the shock of the execution was not enough. As if receiving the bullet-riddled bodies of their children was not enough. As if burying them in a cemetery far from their village, parents, and loved ones did not satisfy the regime. They had to hand the parents the clothes that their children were executed in; pouring salt on wounds that have not yet healed. The clothes contained pieces of flesh belonging to the mutilated bodies of the martyrs. 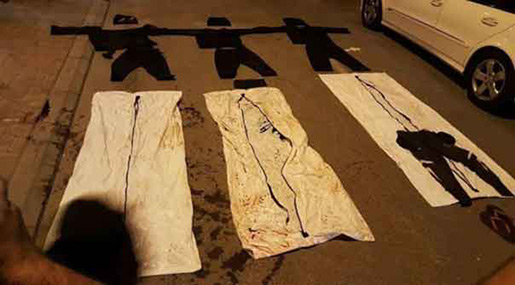 The clothes were soaked in blood. The black color [of the clothes] did not conceal the color of the dry blood nor the flesh. What was the intention of having the clothes delivered to the parents? Were the fathers and mothers of the martyrs able to look at those clothes worn by their sons during their last moments; the black sacks that covered their heads and prevented them from seeing the face of their executioner and his last grin; those clothes that soaked in the martyr's final emotions, trembling with every heart beat as they waited for the shot?

When Abbas al Samea was arrested, they gave him all the belongings of his uncle, martyr Hassan Taher al Samea. Even his last will and testament was shown to him. They told Abbas that he is an extension of his uncle, and that his uncle incited his hatred towards the regime. They regarded him as his uncle's student, instigated against the regime. Abbas was surprised by all this. After all he was just five years old when his uncle was martyred.

After receiving the clothes that his son was executed in, the father of al Samea ordered his daughter not to tell her mother. He knew that she would not be able to bear the news. He himself could not bear to see those clothes. How could a bereaved mother do so? But Abbas's sister was unable to conceal the news from her mother.

In the sitting of consolation [majlis aza], the mother was asked how she was doing. She was strong, encouraging the mourners: Um Abbas...Did they bring you the clothes that your son was executed in? Have you seen them? Did you touch them?

With the same strength, the tearful Um Abbas replies, "no I haven't seen them yet."
She continues, "Handing over the clothes of the martyrs to the families is a kind of psychological torture. What law stipulates this?"

Abbas al Samea's aunt recalls how they received the clothes. On the afternoon of Monday January 17, she got out of the mourning sitting [majlis aza] and headed to her house to pray. On the way, she was stopped by a relative of one of the three families she had seen in the cemetery. He told her that he was entrusted with safekeeping some items for the family.

"He took me to the car and opened the trunk for me. Then he said ‘these are the clothes that the martyrs were executed in.' I gasped, wondering, how did you get their belongings? How did you receive them?" the aunt said.

"We still do not know how that person got the clothes. Strangely enough, Ali al Singace's bag was the only one with his name on it, while the other two bags had no names on them. Mushaima's family was able to recognize their son's shoe, and the third remaining bag containing a pair of pants that we knew was for my nephew Abbas," the aunt added.

Abbas's aunt continued, "I was confused what we were going to do with the clothes. We did not have the heart to open it and look. But perhaps there are remains of their flesh that scattered due to the force of the bullet. Those must be buried, even if they were the size of a needle. The parents received the clothes and buried the pieces of flesh. And now Abbas's clothes are with trusted people who will hold on to them to be a testament for time."

Abbas's aunt did not have the strength to look at the clothes. According to her, "the arrival of the clothes was a great shock to everyone. No one was expecting to see the clothes before their eyes. What I knew was that Sami's bag was full of blood. It appeared that he bled a lot. I did not have the strength to look at the clothes that Abbas was executed in. But my family and relatives saw them. We were not expecting the clothes. That was cruel and a way of gloating, as if mercy was completely extracted from their [executioners] hearts. They had neither feeling nor humanity in them. I still remember how some female police chewed gum during the funeral as if they were attending a wedding. I could not hold myself, and I addressed her: ‘Are you at a wedding? This is a funeral, a funeral of young men.'"

The sister of the martyr Sami Mushaima says, "They came to my mother with the clothes that my brother was executed in. I do not know how the clothes got here and who the person who brought them was. My mother refused to receive the clothes and said: ‘should I take my son's clothes and break my heart. I will not take them.'"

The video circulated of Ali al Singace's mother displaying the clothes of her son in front of the cameras on the street shows how she avoided looking at her son's clothes as she encouraged other women to look at them. She attempted to stop herself from wallowing over the clothes of her son as she encouraged the women to cry. Then she lifted her head, addressing a crowd of screaming and crying women, saying, "look at what the criminals have done. If you could not bear this sight, how can those who committed this crime? How could they do this three times? I will not cry and I do not want to cry. This is my pride. God gave me what I wanted."

Then she points to the clothes and says: "O Allah, accept this offering from me."

Al Singace's sister said that "late on Sunday, after the burial, we received a call from a relative. He told my mother that there are some of my brother Ali's possessions with him. What I understood was that there were pieces of flesh that were stuck in the clothes. I predicted that even the bullets would be there. My mother requested that they be brought to us immediately. I wanted everything that belonged to my brother Ali. They brought us the clothes. The one who brought them wanted them back. So, my mother and I dared and we opened the bag of clothes." That was what everyone witnessed in the video. That's being killed twice.