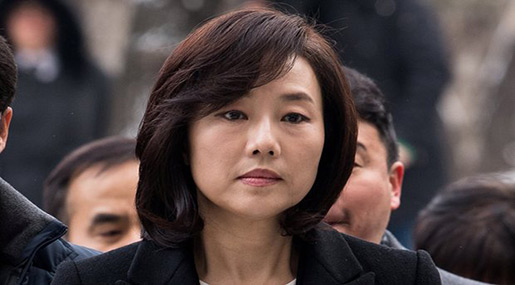 Cho Yoon-Sun - the first minister in active service arrested in South Korea - is accused of creating the vast catalogue to starve the artists of government subsidies and private investment, and place them under state surveillance.

The list's existence sparked widespread anger, raising the specter of Seoul's 1960-80s army-backed rule - including under dictator Park Chung-hee, the impeached leader's late father - when news, the arts, and entertainment were heavily censored.

The Seoul Central District Court said it issued a warrant to arrest Cho on charges of abuse of authority and perjury following a request from prosecutors.

The court also ordered an arrest warrant for Kim Ki-choon, a powerful former chief of staff for Park. Kim is accused of ordering Cho to create the list of "left-leaning" artists.

"Charges are verified ... and there are risks of the accused seeking to destroy evidence," a court judge said in a statement issuing the warrants for Cho and Kim.

Prosecutors questioned Cho and Kim as part of their probe into a wider political scandal involving Park and her secret confidante, Choi Soon-sil, who is currently on trial for abuse of power and coercion.

Park was impeached by parliament last month and Seoul's Constitutional Court is currently reviewing the validity of the motion, with the frequency of hearings sparking speculation it might reach a verdict before mid-March.

The scandal had seen a number of former senior officials and presidential aides arrested.

But the Seoul Central District Court this week rejected a prosecution request for the arrest of Samsung heir Lee Jae-yong, who is accused of bribing Choi in a bid to seek governmental favors, citing lack of evidence.