Turkey can no longer insist on a resolution of the conflict in Syria without the involvement of President Bashar al-Assad, Turkish Deputy Prime Minister Mehmet Simsek said Friday, just three days before new talks. 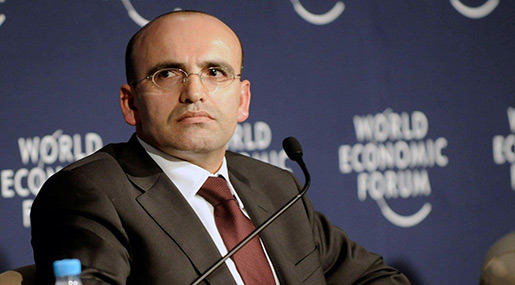 "We have to be pragmatic, realistic. The facts on the ground have changed dramatically," Simsek told a panel on Syria at the World Economic Forum in Davos.

Turkey acknowledged last year that Assad remains an important actor in Syria but the remarks were the first in which Ankara has openly envisaged a deal which does not include his ouster. "Turkey can no longer insist on a settlement without Assad. It is not realistic."

Simsek, a vocal critic of the regime in Damascus, appeared to reflect a policy shift away from Turkey's long-held position of being against Assad having any role when the conflict ends, though he still blamed him for the war's carnage.

Simsek's comments come as Turkey sponsors talks in the Kazakh capital of Astana Monday, together with key Assad allies Russia and Iran to shore up a cease-fire in the war battered country.

The UN Security Council Friday expressed support for Astana talks but stressed they must not serve to sideline UN-led negotiations. During a closed-door meeting, the council discussed the talks after the UN decided to send envoy Staffan de Mistura to the meeting.

On the ground in Syria, meanwhile, Daesh [Arabic acronym for "ISIS"/"ISIL"] militants had destroyed parts of the second-century Roman amphitheater and an iconic monument known as the Tetrapylon in Syria's historic town of Palmyra, the government and experts said.

It was the extremist group's latest attack on world heritage, an act that the UN cultural agency called a "war crime." A Syrian government official said he feared for the remaining antiquities in Palmyra, which Daesh recaptured last month.

After suffering several setbacks in Syria, Daesh had gone on the offensive - reclaiming ancient Palmyra in December and launching an attack on a government-held city and military air base in Deir al-Zor in eastern Syria.

The state news agency SANA said Friday seven civilians were martyred when Daesh shelled a residential area in the city of Deir al-Zor.

Spokesman for Russian President Dmitry Peskov said Syrian troops are continuing their efforts to take back Palmyra, while SANA reported that government forces and allied troops clashed with Daesh militants south of the city.

The latest developments come as Russia and Syria signed an agreement on significantly expanding and modernizing Russia's Tartous naval base in Syria, a Russian government document showed.

Fierce clashes between pro-government fighters and militants near the Tayfur military airport in Homs province left 30 dead, 12 of whom were regime forces Thursday, the so-called Syrian Observatory for Human Rights said.

Maamoun Abdel-Karim, the head of Syria's antiquities department, said reports of the recent destruction in Palmyra first trickled out of the Daesh-occupied town late in December. But satellite images of the damage only became available late Thursday, confirming the destruction.

Takfiri Daesh extremists had destroyed ancient sites across their self-styled "caliphate" in Syria and Iraq, perceiving them as monuments to idolatry.

"The Tetrapylon was an architectural symbol of the spirit of the encounter and openness of Palmyra - and this is also one of the reasons why it has been destroyed," she said in a statement.

Abdel-Karim told the Associated Press that only two of the 16 columns of the Tetrapylon remain standing.

Meanwhile, under an agreement signed in Damascus Wednesday, Syria had offered Russia free use of the Soviet-era facility in Tartous for 49 years. The term can be automatically extended for further 25-year periods if neither side objects.

The facility is the only such outpost Russia had outside the former Soviet Union. The Russian military had used Tartous to back its campaign in support of the Syrian government against the extremist militants.

The deal also allows Russia to modernize the site so that it can host up to 11 ships at a time, including the nuclear-powered ones. For now, Tartous only has room for a couple of midsized ships at a time. The Soviet Union first signed a deal with Syria to establish the facility in 1983.

The new agreement says the facility "has a defensive character and isn't directed against any other nation." It also says the Russian military will ensure air defense of Tartous and also protect it from the sea. The agreement also stipulates that Russia will help Syria restore its Soviet-built warships.

Last August, Russian lawmakers ratified another deal allowing Russia to keep its forces at the Hmeimim air base in Syria's coastal province of Latakia for as long as it wants. The deal was signed in August 2015 in Damascus, a month before the Russian air campaign began.

Turkey is leading Syrian opposition insurgents in an offensive against the Daesh-occupied town of al-Bab in the Aleppo province, a push that has been bogged down since mid-November. Since its illegal military intervention, Turkey had lost 54 soldiers in Syria, most of them in the al-Bab offensive.

The so-called Observatory reported Friday that an airstrike killed more than 40 members of the Jabhat Fatah al-Sham[formerly known as al-Nusra Front] in northwestern Syria. It was not immediately clear if this strike was the same one the defense official was referring to.