US police had used pepper spray on protesters demonstrating the inauguration and presidency of Donald Trump in Washington, DC, as the nation's capital braces for massive protests for Trump's swearing-in ceremony on Friday. 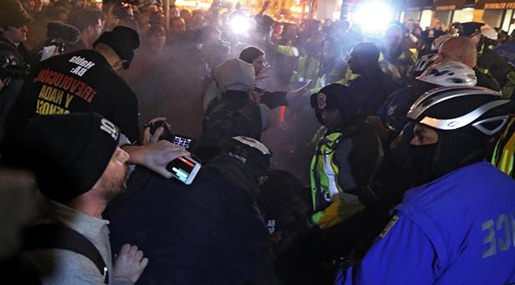 Police used pepper spray to disperse protesters where a pro-Trump event was being held while smoke was also seen filling the street.

A protest organizer said police acted aggressively and tried to "cattle corral" demonstrators, and hoped the use of pepper spray wouldn't dissuade others from turning out to protest during the inauguration.

One of the largest anti-Trump protests expected on Friday will be organized by the ANSWER Coalition, a protest umbrella group consisting of many antiwar and civil rights organizations. The group expects to have thousands of its members rally along the parade route.

The largest protest is expected to be the Women's March on Washington on Saturday, when about 200,000 people from around the country are expected to attend.

Trump vowed on Thursday to unify the country as thousands of people took to the streets of New York and Washington to express their displeasure with the president-elect.

"We're gonna unify our country and our phrase - you all know it, half of you are wearing the hat: 'we're gonna make America great again, Trump told a large crowd of his supporters on Thursday in the nation's capital.

Trump plans to use his first speech as president to try to ease tensions, according to his aides.

"He wants to continue to talk about issues and areas where he can unite the country - bring it together," said Trump's transition spokesman and incoming White House spokesman Sean Spicer.

Despite the call for national unity, over 40 congressional Democrats have said they plan to boycott Trump's inauguration.