The Constitutional Court in South Korea is continuing hearings in the impeachment trial of the country's President Park Geun-hye over a major corruption scandal. 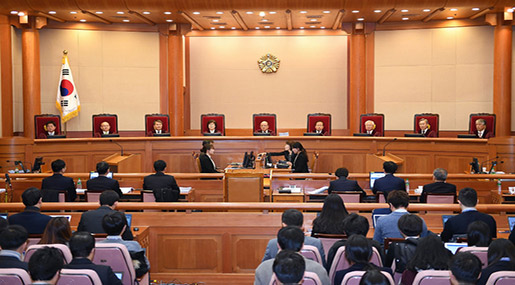 On Thursday, the nine-justice court began a first session to hear oral arguments in Park's impeachment trial after a delay over her refusal to appear in court.

The tribunal, nevertheless, proceeded without the presence of Park, as the Constitutional Court noted it could not force her to appear.

During the court session, prosecutors and Park's lawyers traded pointed arguments on the validity of accusations that the South Korean president was involved in an influence-peddling case, in which she had allegedly colluded with a close friend, Choi Soon-sil, to extort money and favors from major corporations.

Lawmaker Kweon Seong-dong, the chief prosecutor in the trial, said Park had betrayed public trust by "broadly and gravely" violating the constitution and criminal laws.

Park's lawyer Lee Jung-hwan, however, said the accusations "lack evidence and fail to make legal sense" because they were based on allegations and media reports rather than criminal convictions.

The court is set to hear witnesses later in the day.

Park, whose father ruled South Korea for 18 years after seizing power in a 1961 coup, has denied misconduct in the case but nevertheless apologized for being careless in her ties with Choi, who is facing her own trial.

If the Constitutional Court confirms the impeachment vote, a process for which it has 180 days, Park will become the first elected president in the country to be forced out of office.